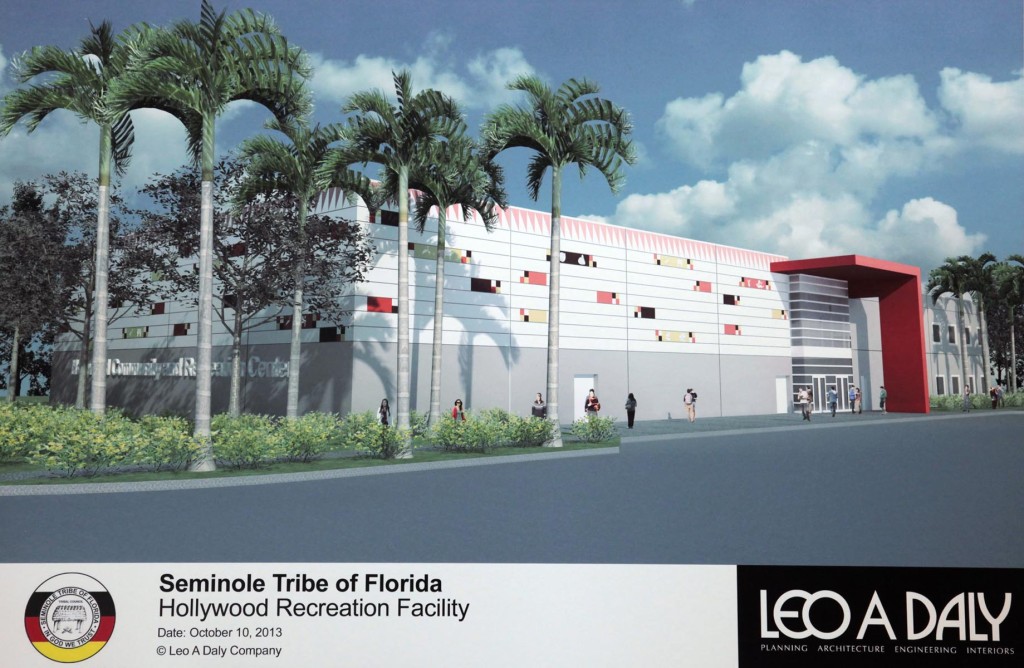 HOLLYWOOD — Hollywood Reservation will see big changes in the coming months with the construction of a new recreation facility, new homes and new townhouses.

The construction of the 39,000-square-foot, two-story recreation facility will likely begin in mid-December. It will house a gym, the Boys & Girls Club and the Fitness and Culture Departments and will encompass the area from the Boxing Gym west to 64th Avenue and from 30th Street north to the fence surrounding the Ball Field.

The project is expected to be complete by Christmas 2014, said Hollywood Councilman Chris Osceola.

“One of my goals was to get the Hollywood gym and the Fort Pierce community center done during my two-year term,” he said. “We got input from the Boys & Girls Club, the Culture committee and Tribal members; we worked collectively on the concept and the design.”

Designed by the architectural firm Leo A Daly, the gym incorporates Clan symbols and Seminole colors on its exterior. Seminole Stiles will build it.

The first floor will contain two full-size basketball courts. Other amenities include a catering kitchen, with a buffet service area, to accommodate community events.

The area designated for the Culture Department, also located on the ground floor, will feature a teaching kitchen, classrooms and multipurpose room. Outside, a traditional camp will be set up with a cooking chickee at the center. Because the culture chickees near the existing gym have been taken down, Imahaggi Tiger’s camp – located at the corner of 64th Avenue and James E. Billie Drive – will host community culture events until the new facility’s completion.

The fitness area will include a fitness room plus a cardio and weight room with a large picture window overlooking the basketball court.

The outdoor basketball court by the current gym will get a permanent cover, known as an airnasium, to provide shade and shelter to encourage more use in hot weather.

“This is one big project for that whole side of the reservation,” Councilman Osceola said. “Tribal members will be safe in their homes instead of having to evacuate their trailers for a hurricane. It’s long overdue.”

For the time being, the Boys & Girls Club has relocated to a trailer next to the gym and the Seminole Estates Clubhouse can be used as a community center for large events when necessary.