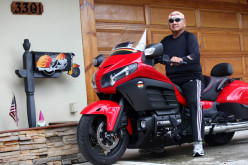 HOLLYWOOD — Max Osceola Jr. likes to consider his age in BC timeline.

On Aug. 13, the former Tribal Councilman personalized another point in time: 50 years on two wheels. He drove to Key West to mark the anniversary, a half-century after he revved up his first Honda and became hooked on motorcycles.

“I feel the need for speed,” Osceola said in a shed-turned-clubhouse he calls the Harley House. There, on the Hollywood Reservation behind the home he’s lived in since 1962, motorcycle memorabilia collected during hundreds of runs fills walls and shelves.

Photos of him dressed in patchwork and leather on the many bikes he’s owned through the years illustrate decades of adventures, from quick jaunts for lunch in Clewiston to cross-country excursions from Florida to California.

Osceola has owned more than a dozen bikes, including a Honda 750, a Harley Heritage, a Boss Hoss with a Corvette engine, a Road King, several Ultras, two Road Glides, a Triumph Rocket and a BMW. Only once did he own two at the same time.

“A bike is like a woman. If you have two of them, you have to choose which to spend the most time with,” said the “one woman man” married 37 years to college sweetheart Marge – and still in love.

Now, at 64, Osceola is comfortable on a Honda Gold Wing, a 1400cc monster that he calls “a convertible with no doors.” His most recent long-distance ride was a “fast and smooth” drive from San Diego, California to Hollywood, Florida in May.

“I wasn’t looking for a lifestyle. I just needed transportation to school,” he said. Osceola started the first day of his high school career by vrooming up to McArthur High in blue jeans and sunglasses.

He helped his father, Max Osceola Sr., purchase the $110 motorcycle by spending a summer working as a janitor at Seminole Okalee Indian Village, then a crude attraction at Stirling Road and State Road 7.

“I remember thinking, ‘How many days do I need to work to help dad get the bike?’ Thirty hours a week all summer long,” he said. Minimum wage was $1.15.

It was worth it.

“You get such a euphoric feeling. You can hear the wind, the rumble of the motor and you want to ride forever,” he said.

Osceola never joined a biker organization, but his “colors” have always been red, yellow, black and white – Seminole colors.

Osceola has lost track of how many times he trekked from Florida to the California coast, but he thinks about a dozen. Sturgis, South Dakota? Seven times. The Kyle Petty Charity Ride? Sixteen times.

He rode alongside a camel on a dirt road in Dubai, United Arab Emirates; cut into a buffalo herd in Custer State Park, South Dakota; and cruised through the European countryside in Prague, Czech Republic.

For his 50th birthday, Osceola traversed the postcard-perfect winding roads of Oahu, Hawaii.

As for the dangers of driving a motorcycle, Osceola said there are two kinds of bikers: “Ones who have fallen off and those who haven’t yet.”

He earned a broken wings patch after being involved in a crash six hours into a Kyle Petty Charity Ride. He knows the Creator was with him because of three rescuers who stopped to help him. One was a nurse, one was a preacher and the other was a biker who was the first to dial 911.

A few bumps and a few weeks later, Osceola was back in the saddle.

“Bikers play as hard as they work. You can be yourself, free. People who ride horses feel it and the motorcycle is my iron horse,” he said.