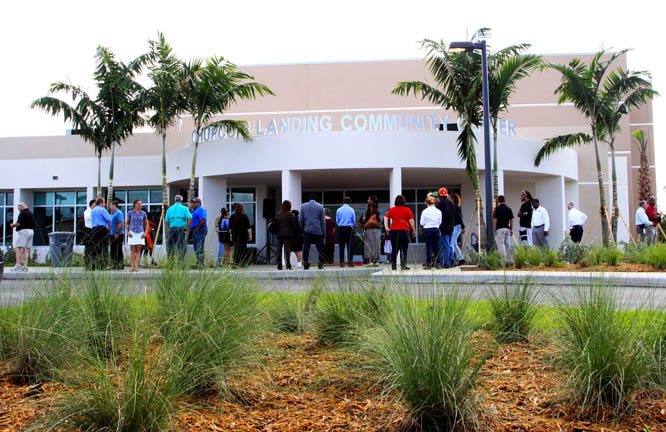 FORT PIERCE — Plenty of time is ahead for memories to be made inside the new Chupco’s Landing Community Center where future gatherings and meetings, basketball and volleyball games and pool parties will yield an abundance of stories for the tightly knit Seminole reservation in southwestern St. Lucie County.

Councilman Osceola recalled the vital role the old Hollywood Reservation gymnasium played in his life as a kid.

“Without that place, I don’t know what would have happened to a lot of us kids when we were growing up because we had nothing else, much like this reservation before this building was here,” Councilman Osceola said.

Instead of playing basketball with portable goals in the street or driveway, residents from Chupco’s Landing and other local Seminoles now have a full-size, indoor basketball court with six retractable hoops.

It will also house other Tribal departments, including Culture, Education and Housing.

“This isn’t just a gym; it’s a community center,” Councilman Osceola said. “We’re going to have all the support that they need over here in the offices. We’ll have somebody from just about every department here during the course of the week to address the needs of the community members in Fort Pierce.”

Hollywood Council special assistant Alexander Tommie delivered brief remarks outside the entrance before welcoming everyone inside the 18,000-square-foot building. Tommie remembered how nervous he was when the project’s funding came up for a vote before the Tribal Council last year.

“We got a 5-0 vote,” he said. “That was a joyous day. That had my heart jumping. I said, ‘I can’t wait to get back to the community and tell them what happened.’”

Tommie delivered the good news, and less than a year after breaking ground, the Tribe and Seminole/Stiles Construction delivered the centerpiece of the mostly residential community nearly three months ahead of schedule.

“The design committee was great,” said Peter Picard, Seminole/Stiles project manager who worked with the Tribe’s project manager Cedric Jenkins. “Alexander Tommie was at every owner’s meeting. He did a really good job in making selections and participating. We actually had until the middle of December to finish this project, so we’re pretty proud. We wouldn’t have done it without everyone’s help.”

About 50 attendees of the dedication ceremony were treated to stories, including one from Sally Tommie. The former Council Liaison for Fort Pierce spoke about how her grandmother, Sallie Chupco Tommie, paved the way for future generations in the community.

“She stood very tall; she was very bold,” Sally Tommie said. “She carried a shotgun and a bull whip and a stick. Anytime she needed to use it, she used it. She had no fear.”

“She did what she had to do along with Jack Tommie, my grandfather, to go out into the woods, to find food to bring back and feed the family, to build chickee huts so that we could have shelter, to do the things that needed to be done so that we would survive,” Sally Tommie continued. “They are here with us in spirit. Physically, they have gone on, but we remain here with the responsibility … to lead by the example they have set forth for us.”

Another story came from Max Osceola Jr. The former Hollywood Councilman took some good-natured ribbing for accidently wearing two different boots at a previous groundbreaking ceremony. Properly attired this time, he recalled darker days that have given way to brighter ones.

“Growing up in the ’50s, segregation was the law of the land back then,” he said. “I can remember as a boy we’d drive by Fort Lauderdale and see these nice baseball fields and football fields. I asked my dad, ‘How come we can’t play there?’ He said, ‘We’re the wrong color.’”

Times have changed more than a half-century later.

For most local officials in attendance from Fort Pierce, Port St. Lucie and St. Lucie County, the invitation into the gated community marked their first visit.

“I’ve driven by this place so many times,” said Larry Lee Jr., state representative from District 84. “When I was elected to the Florida House of Representatives, I said maybe if I go tell them that I’m a state representative, they’ll let me in. I’ve waited for this opportunity for so long to come behind those gates.”

Fort Pierce Mayor Linda Hudson grew up on nearby Jenkins Road, where one of her neighbors was Lonnie Buck. As a youngster, Hudson had Seminole friends in school.

“I’m of a certain age that I went to school with the first Seminole children who went to public school in St. Lucie County,” Hudson said. “They were my classmates. One was Bert Jones, one was Louise Jones [Gopher] and Addie Smith. They would come to my house after school. My father would come home after work and put us all in the back of his pickup truck and we would take them home to the chickee village off Orange Avenue. We did that once or twice a week.”

“I’m so impressed with what they have done,” Hudson said.

“We’re proud to say that we’re able to do things for our community as well as anybody else can think about doing for their community,” Alexander Tommie said.