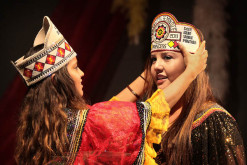 “I have been in those shoes. It means so much and it is nerve-racking, but it is an honor,” said Brianna Nunez, Miss Brighton Seminole 2010 and the current Miss Florida Seminole.

After a two-year hiatus, the Brighton Seminole Princess Pageant was reborn Sept. 26 amid its entire past splendor. This time, again led by Miss 1981 Salina Dorgan, a committee hosted the special occasion complete with cheering sections and a panel of three distinguished judges at the Brighton Veteran’s Building.

The pageant featured six contestants, three for each crown, who passed a rigorous muster to compete in the final event’s clothing, talent, essay and impromptu question categories.

Contestants must be Tribal members, students in good standing and able to represent Brighton in Tribal events and outside happenings, such as the annual Chalo Nitka Festival in Moore Haven and the Swamp Cabbage Festival in LaBelle.

Harley Johns, 17, daughter of Anthony and Crystal Johns, is the newest Brighton Miss.

A photographer who plays the violin and loves spending time with her family, Harley wore a patchwork contemporary dress emblazoned with fire signs depicted in brilliant oranges and reds.

Harley displayed a black-and-white portrait she captured of her grandfather Archie Johns during the talent competition.

“He has history written deep down in his heart. The photograph brings back cherished memories,” Harley said. “With photography, you can tell emotions, history and news. You can tell a story.”

Alice Brady said her daughter was given the right to dance in the “circle” in front of elders, community members and non-Tribal members by her grandfather Charles Yellow Fox Jr., of the Northern Cheyenne Tribe. Alliana choreographed the dance to “Prayer Loop Song” by Native American hip-hop artist Supaman.

Both Harley and Alliana were also winners of the pageant essay contest.

“Respect” was the theme of Alliana’s essay.

“To serve as the Brighton Jr. Miss Princess means to carry yourself in a good way. To respect myself by being the best young lady I can. To respect my elders by listening to what they have to say and to respect my community by keeping it clean and safe. I will respect my language by speaking it as much as possible and to honor the teachings of my grandpa and grandma,” Alliana wrote in the essay.

Other Jr. Miss contestants included Krysta Burton, 13, who used photographs to illustrate how to make sofkee; and Janessa Nunez, 12, who demonstrated how to fashion a Seminole doll.

The Brighton Miss division featured Aiyana Tommie, 15, who told the audience how to skin and tan a deer hide; and Brydgett Koontz, 17, who showcased several of her handmade patchwork dresses and described the different symbols used in each.

Don T. Hall, a 12th Judicial Circuit judge who sat for the night as a pageant judge, said the job was a “difficult” one.

“When you have to make a decision like this you figure that one or more of the contestants would rise well above the rest, but tonight I couldn’t score but a half-point difference. All of them successfully drew us into their talent. Any one of them could represent Brighton,” Hall said.

Jo Randolph, who is a longtime Lakeport community activist and recent founder of the Lakeport 4-H Club, and Jerald D. Bryant, a 19th Judicial Circuit judge, rounded out the judging dais.

“We want the girls to get the exposure, be on stage, represent the reservation in front of an audience and have that experience of being title holders for the Tribe,” Dorgan said.

Harley said she is thankful and anxious to start her Brighton reign.

“I’ve always dreamed of this and really worked hard to achieve the honor. I’m thankful and ready to start the journey – a dream come true,” Harley said.