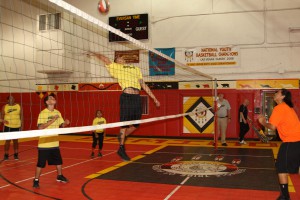 BIG CYPRESS — From popular sports like basketball to less common ones like fling-a-frog and alphabet mania, this year’s Ahfachkee School’s Field Day had it all.

The middle and high school students were grouped into six teams.

The teams faced off in five rounds that lasted 20 minutes each. Some students played softball at the Big Cypress softball field, while others played basketball and volleyball at the Herman L. Osceola Gymnasium.

Kindergarten through fifth-grade students enjoyed games at the Ahfachkee School. There were 10 teams in the elementary group.

In the end, Team Yellow came out on top for both school groups.

“Dynamite comes in small packages,” Team Yellow’s Savannah Tiger said. “We just wanted it more than all the other teams, I guess.”

Team Green’s Dillon Thomas, whose squad lost an overall tiebreaker to Team Yellow (due in large part to a 6-1 loss in the Round 5 softball game), offered a brief analysis of the results.

“We tried, but they (Team Yellow) just got the better of us,” Thomas said. “I thought we were going to win, but they didn’t let up on us. That’s how they got the tiebreaker on us.”

“I’m glad to see the kids running around because it breaks up the daily grind of regular schoolwork, day after day,” said Sergo, who served as an umpire at the Big Cypress softball field. “I’m sure the kids felt the same way, too. It’s a good way for them to burn up some energy they have on the inside.”

“It’s a great time for us to get some stress relief,” Cleckler said. “The staff gets a chance to enjoy all the events with the students.”

“We really connect together,” he said. “It brings us closer and gives us a better bond with each other.”