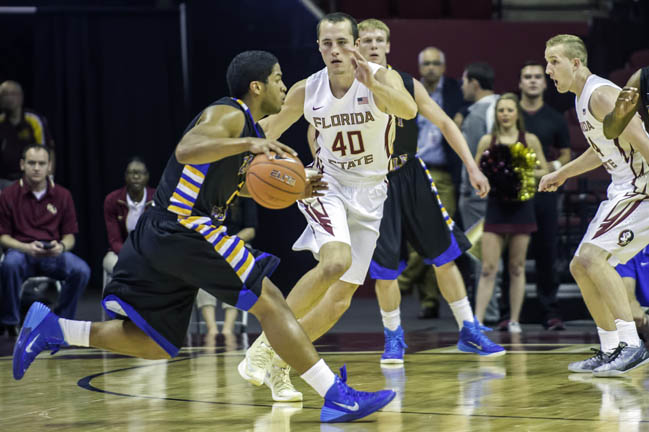 TALLAHASSEE — DeForest Carter grew up as a Florida State fan. He wanted to attend FSU. Even though his college path brought him to Daytona Beach, he has remained an FSU supporter.

But for 40 minutes Nov. 3, Carter put aside his affection for FSU and did everything he could to beat their men’s basketball team, which proved to be a tall order.

“I’m guarding a guy 6-foot-8. I’m 6-1. They had three 7-footers,” Carter said after his Embry-Riddle Aeronautical University team came up short in its upset bid against FSU in a preseason game at the Donald L. Tucker Civic Center in Tallahassee.

Despite suffering a 95-73 loss, the game that featured a Seminole from Big Cypress versus the FSU Seminoles proved to be a memorable evening for Carter.

David versus Goliath matchups are common in preseason college basketball. FSU, an Atlantic Coast Conference team whose schedule includes powerhouses Duke and North Carolina, was expected to cruise past Embry-Riddle, a National Association of Intercollegiate Athletics (NAIA) team whose schedule includes tiny schools such as the University of Maine at Fort Kent and Alice Lloyd College in Kentucky.

Embry-Riddle hung with FSU longer than expected and even led by six points with about seven minutes left in the first half. A surge by FSU gave the Seminoles a 49-40 lead at halftime.

“We were feeling pretty good, but then they went on a run,” Carter said. “They started to wear on us.”

FSU didn’t relinquish its lead in the second half, but Carter finished with impressive numbers at both ends. The senior point guard picked up where he left off last season when he earned Honorable Mention NAIA All-American and First Team All-Sun Conference honors.

He drained a team-high 16 points on a solid 6-for-8 performance from the floor, which included a pair of 3-pointers. He dished out a game-high nine assists, four more than anyone else on the court, and he accounted for all four of his team’s steals, also a game-high. His five rebounds – including two on the offensive boards – tied for the team-high.

“We’re a good team, too,” he said, noting that this year’s returnees from last year’s 24-7 club include six seniors and the Sun Conference Freshman of the Year. “Most of the seniors, we’ve known each other for three-plus years. They’re like my other family.”

Carter’s strong performance against FSU dismissed any concerns about how an off-season leg injury that kept him off the court for part of the summer would affect his game. He admitted he spent too much time on the couch while recovering and at one point weighed 250 pounds. But after returning to the court and to workouts, he shed more than 30 pounds and started the season “in the best shape of my life.”

“I’ve always been a big guard,” he said. “I feel like I’m lighter. I was able to stay up with some of (FSU’s) really quick guards.”

The FSU game didn’t count in the standings, but it still meant a lot to Embry-Riddle as the Eagles prepared to embark on their regular season in the NAIA.

“We lost by 20, but we put it all in perspective and take the positives out of it,” Carter said.

Embry-Riddle took those positives and promptly started with a 4-0 record through mid-November. Carter scored 10 points and had five steals and four assists in a season-opening win against Sterling. In the next three games, he amassed 23 assists and 12 steals.

As for Carter’s allegiance to the Seminoles in Tallahassee, the preseason game didn’t change a thing.