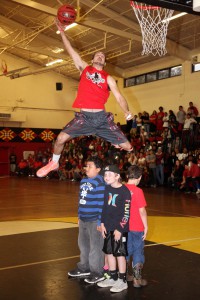 BRIGHTON — Earsplitting sounds radiated from the Brighton gym on Feb. 15 as pop music played at top volume and students cheered their loudest.

They were wowed as a basketball took a circuitous route to swish through a hoop, thanks to the skills of internationally renowned slam dunker Kenny Dobbs, the man who controlled the ball.

Pemayetv Emahakv Charter School students were treated to a gravity-defying performance by the amateur slam dunk champion as part of Brighton Field Day. In addition to the impressive amount of time he spent seemingly floating in air, Dobbs gave students a motivational speech outlining how to achieve their dreams.

But first, kids and teachers alike became props for Dobbs as he set up what looked like impossible scenarios to make a shot at the basket. The show started small with just one student standing under the basket. Dobbs took off dribbling down the court at full speed, leapt over the student and easily dunked the ball in the basket to thunderous applause and cheers. With each shot, more students were recruited to stand under the basket – two, three and four at a time until he lined up six students. He told them to crouch and had a seventh student toss him the ball directly over the crouching students’ heads. No problem; Dobbs ran down the court, caught the tossed ball and almost effortlessly dunked it through the hoop as the crowd roared in appreciation of the feat.

After the theatrics, Dobbs got serious and shared his story.

“The real reason I do what I do is to inspire you kids to make positive choices in your life,” said Dobbs, a member of the Choctaw Nation.

Known as “The Dunk Inventor,” Dobbs was drafted in 2012 into the NBA Development League team the Texas Legends, which is affiliated with the Dallas Mavericks. Dobbs has toured with the NBA and the Sprite Slam Dunk ShowDown as a celebrity dunker, performed in front of sold-out stadiums during halftime shows, celebrity games and NBA All-Star Weekends. He is popular on YouTube and has appeared on ESPN, Fox Sports and NBA TV.

Dobbs, from Phoenix, told the students he got into drugs and alcohol at age 11, dropped out of school at 15 and went downhill from there. At 17, he found himself facing jail on a robbery charge.

“I realized there is no loyalty on the street and in the end, the only people who will be there for you is your family and God,” he said. “I started to choose my friends more wisely, made positive choices and separated myself from the kids who got into trouble, even the music.”

Building on his new foundation, Dobbs set a goal to graduate high school, which he achieved two and a half years later.

“I realized I was having a negative impact on my family,” Dobbs said. “My younger siblings saw me as a leader. So I went back to high school and graduated. For the first time, my mom cried tears of joy instead of pain and sorrow.”

The feeling of accomplishment Dobbs experienced was so strong, he was emboldened to begin setting more ambitious goals. He’d never played sports in school but wanted to be a basketball player. He practiced and tried to get a scholarship to college, to no avail.

Dobbs attended an open gym at a Glendale community college in Arizona, where he was awarded a full scholarship based on his performance on the court. In 2008, he went to Los Angeles to compete in a slam dunk contest hosted by former Miami Heat basketball star Shaquille O’Neal, which launched his career competing in worldwide dunk competitions.

“Everyone there was bigger than me,” he told students. “I doubted myself, but knew I had talent.”

After Dobbs nailed a “crazy dunk,” people were impressed. He learned the lesson well.

“You should never doubt your ability,” Dobbs told students. “Don’t let things stand in your way, believe in yourself, set goals, make positive choices, choose your friends wisely and see yourself as a leader.”