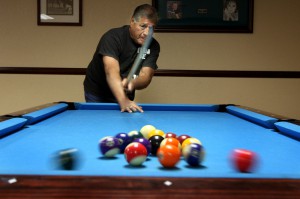 BIG CYPRESS — Anyone with competitive spirit is invited to battle for bucks at weekly billiard tournaments on the Big Cypress Reservation.

Hosted by the Big Cypress Recreation Department at Big Cypress Billiards, the Thursday night pool tourneys are so far drawing about a dozen pool players. At the 10-table venue, there is room for more.

“It’s a get-together,” said Tony Bert, who started the tournament and for whom the Tony Bert Weekly Billiard Tournament is named.

“It’s a subculture of people,” said Nick Tiger, who runs the event for Bert and the Recreation Department.

“It’s both,” said Ildy Garcia, who comes armed with his own custom-made pool stick and chalk box with animal bone keychain.

Bert, Tiger, Garcia and Cody Bert make up the reservation’s championship billiard team The Departed, or Rack My Balls, depending on who is asked. In two corners of the pool hall, tables are filled with trophies that attest to their ability.

Beginners to advanced players, male and female ages 18 and older, are welcome to play for a $10 entry fee. At the end of elimination rounds, two male and two female winners get a share of the pot.

“We’ll even teach people how to play. Lessons are available noon until 9 p.m. daily, except Wednesdays when we close at 6,” Tiger said.

Smoking and alcohol are prohibited, but a free dinner buffet that includes spam and tomatoes with rice is served courtesy of Bert’s mother, Sue Jane Bert.

Marcia Cypress and Celeste Kenyon were the only women who played on opening night, Feb. 28. Cypress placed first in the night’s competition.

“I just like the game of pool. All the other women can stay home so I can win every week,” she said.

Rob Landin took the top spot of the night for men, with Ildy Garcia in second place.

Lonnie Billie, who also showed to shoot pool, said he is in it for the fun. Is he any good?

Win or lose, the tournament promises a few laughs, good food, potential to win a few dollars and a chance to make new friends.

“Come out and hang out. Who knows? You might have the lucky stroke,” Tiger said.