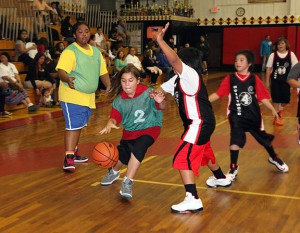 HOLLYWOOD — The Tribalwide Hot Dogg Basketball Tournament, held in Hollywood March 8-9, was a memorial and a tribute to the late Dwight “Ike” Jumper, a basketball lover.

“We all played basketball together growing up,” said tournament organizer Michael Gentry. “All our friends who passed away are up there playing basketball. We just wanted all the kids to enjoy their time as young kids.”

The tournament began with the 10 and under teams: Miami Heat, Panther and Hollywood. In the final game, Miami Heat defeated Panther 38-36.

High school girls’ teams were ULS and Monstars. In the final, ULS beat Monstars 46 to 24.