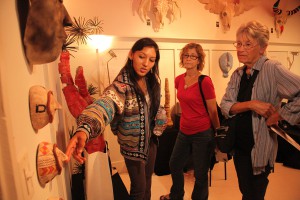 MIAMI BEACH — When Jessica Osceola was a little girl, she glued random objects together and proudly showed her parents the creations. Now as an adult artist, she showed her mixed-media sculptures to the world at Art Basel Miami Beach from Dec. 6-9.

Known as one of the largest art markets in the world, Art Basel featured works of more than 2,000 artists in the main venue and hundreds more at 23 satellite art fairs held in Miami and Miami Beach. Osceola displayed her work with two other Native American artists at the Select Fair, a satellite show at the Catalina Hotel & Beach Club.

“I also got into Art Basel last year,” said Osceola, of Naples. “They invited me back and wanted me to invite other people. It’s been amazing; I’m on top of the world. We’re all Native Americans, and we’re trying to break some perceptions. Our art isn’t all crafts and beads; there are other interesting things going on.”

The other artists who showed with Osceola were Cannupa Hanska Luger and Jamie Cross, and together they formed CJJ Collective. The three young artists met while in school at the Institute of American Indian Arts (IAIA) in Santa Fe, N.M. All pieces were mixed-media and ceramics.

“I just kept evolving,” said Osceola, who graduated from Florida Gulf Coast University (FGCU) in 2008. “I majored in history at college and was taking art courses on the side. I like history through objects; art always keeps the world moving and progressing. It’s really an important part of history.”

After graduation, Osceola attended IAIA for one year and is now working on her master’s in fine arts at the Academy of Art University. Her long-term goal is to work as a full-time artist.

Osceola, who first learned about Art Basel through a former professor at FGCU, was accepted to the show in 2011, sold some pieces and returned this year with more sculptures. One of Osceola’s pieces, titled “Not Yours, Not Ours, Not for Sale,” is a response to the trend of the fashion industry’s “Tribal inspiration” and features ceramic legs protruding from a Donna Karan shopping bag.

“This sculptural body of work is the reaction to this trend and one designer in particular,” read Osceola’s notes next to the piece. “Donna Karan launched in her spring 2012 clothing line a skirt that she claims to be inspired by her own creative process and her work in Haiti. The ‘Ric-Rac’ skirt she has designed is NOT her unique design, nor is it that of Haitian inspiration.”

Osceola continued to say that the design goes back many generations within the Seminole, Miccosukee and Independent Tribes. Her Seminole ancestors created the design using hand-crank sewing machines and fabric, passing down their knowledge to her.

“As a traditional Tribal artist, traditional arts teacher, cultural preserver and a granddaughter who learned these techniques from family, I take great precaution in guarding the craft,” she wrote.

In their work, all three Native artists infuse a modern take on their own Tribal traditions.

Cross, a member of the Inupiat Tribe from Alaska, wants to be a working artist but plans to have another job for her primary source of income.

“That takes the pressure off me so I can create things I want to make instead of what I think people want to buy,” said Cross, who lives in Santa Fe.

Luger, from the Mandan Hidatsa and Arikara Lakota Tribes in North Dakota, also lives in Santa Fe and supports himself and his family with his art.

“For Native arts, Santa Fe is the pinnacle,” Luger said. “Art Basel is like a shopping mall for galleries. You can see which galleries your pieces can fit into. Having a show with a body of work makes it easier to get people interested in my work.”

Art Basel was a success for the artists; each sold pieces while a continuous stream of art lovers viewed their work.

“The experience was fantastic,” Osceola said. “It was crowded and crazy, and I made a lot of connections with galleries, collectors and photographers. It was exhausting and draining, but it was good exposure.”