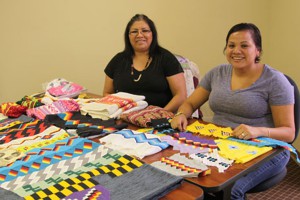 HOLLYWOOD — Twenty-seven years ago, Regina Thinn was just like many other people, struggling to pay bills and to feed her children. She had a 9-to-5 desk job but didn’t enjoy it and wanted something different.

She started with beading but realized she had a passion for sewing. Regina’s mother, Annie Osceola Jumper, introduced her to patchwork making, but her grandmother, Mary Motlow Osceola, really taught their family the ins and outs of the craft.

Not only has she been recognized by the Seminole Tribe for winning first place in the Seminole Tribal Fair for many years, but Broward College also showcased her talents. She created four patchwork wall displays to represent the four seasons, which the college displayed in a temporary exhibit on campus in 2008. The pieces now hang at Tribal Headquarters after former Hollywood Council Rep. Max B. Osceola Jr. purchased them.

“I can’t even imagine…living without sewing,” she said. “It’s just been in our family for so long.”

Sewing has been in Regina’s family for generations, and she hopes it will continue for generations more. To help carry on the tradition, she teaches culture workshops to Tribal youth throughout the year.

“Tribal children should learn some craft,” she said. “It’s our art.”

Her daughter, Janine Cypress Vasquez, has been sewing for eight years and enjoys it. Working at home allows her to spend time with her family, which is important to her.

One of her favorite pieces to date is her son Luke Baxley Jr.’s first big shirt, which she made for him when he was 1 year old.

Janine began with basic designs, but she uses a trick her grandmother taught her to learn new techniques.

“My grandma always flipped everything over and said, ‘You can do that,’” she said.

Janine hopes her kids will pick up sewing or another Tribal craft.

Patchwork is a vital staple in the Seminole culture, and the mother-daughter duo hopes all Seminole children will embrace their gifts and carry on their traditions.