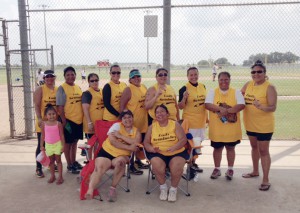 Four teams from Seminole Country (two men’s and two women’s) made the road trip to participate in the annual NASA tournament from Aug. 10-11, hosted by the Coushatta Tribe of Louisiana. Showing that they still have fight in them, the Lady Seminoles brought home the championship trophy and the Hayla Boyz came in a respectable third place.

The Lady Seminoles, a combined team from Hollywood, Brighton, Immokalee and Choctaw reservations, made up the “40 and over” championship team.

The Lady Seminoles started their winning journey by defeating the Cherokees 9-2 in game one, but they lost their second game to last year’s champions, the She Devils, by a close score of 7-8.

Having played two games already, the Lady Seminoles started to slow down. The Cherokees quickly gained the lead by a score of 11-8 in the last inning. With one chance left on final bat with bases loaded, the Lady Seminoles’ Carlene Osceola hit a long-drive ball out to center field, clearing the bases. They took over by winning 12-11, which gave them a shot at the championship game.

The Seminoles were awarded a team trophy, championship jackets and of course, bragging rights.

If it weren’t for the sponsorship of Leslie Osceola, who paid the tournament entry fee, and Hollywood Board Rep. Chris Osceola, who purchased the Seminoles’ jerseys, it all would not have been possible to win the tournament, said Salina Dorgan, Lady Seminoles team member.

“The Lady Seminoles team would like to give a big thanks to all those that made it possible to play in the NASA tournament,” Dorgan said.

The Hayla Boyz played two games on Friday and six games on Saturday, making it all the way to the semifinal round. The combined team from Brighton, Hollywood, Immokalee, Big Cypress and Cherokee reservations was awarded third place, receiving a team trophy and T-shirts.