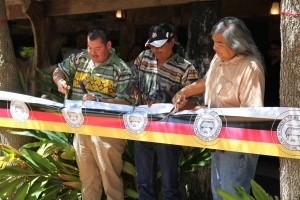 It was the Grand Opening of the new Seminole Casino on the Big Cypress Reservation.

The parking area of Billie Swamp Safari, the Seminole’s outback tourist enterprise, was filled with cars, trucks and guests, including Tribal, local and county officials. Nearby, food was being prepared for a grand buffet. Seminole women in bright Native garb were busy making frybread and demonstrating patchwork sewing while Seminole men in patchwork shirts were carving canoes and knives.

The roaring airboats were soaring in the distance. Even some of the stars from Swamp Men, on a break from reality TV, were on hand with a bear, a panther and a skunk.

“For a long time out in BC, it’s been kind of fragmented,” Big Cypress Board Rep. Joe Frank said. “But it won’t be that way anymore.”

Thirty-seven Las Vegas-style slot machines were installed inside the back section of the Swamp Water Café, the Safari’s restaurant with the commanding view of the reservation’s Kissimmee Billy Strand. They replaced the old Big Cypress Casino, which suffered under a nearby tent near the 2,000-acre, watery complex.

“The first thing we had to do was get out of that tent,” said Seminole Gaming CEO Jim Allen, who credited Councilman Tiger’s diligence in making it happen. “This is the first step.”

“I am committed 100 percent to this project,” he said.

Phase One – moving the existing casino into the restaurant at Billie Swamp Safari – is complete.

Phase Two, now in operation, involves minimal landscaping and the replacement of existing concrete pathways and sidewalks with loose materials, decomposed stone materials, crushed shell or stone. Future phases include construction of a new, 8,665-square-foot reception center near the Billie Swamp Safari entrance off West Boundary Road. The center will house a 90-seat restaurant and a 50-slot casino connected to Native Village Park by water taxi or electric shuttle.

The final phase will complete the renovation of the village, including restrooms, conversion of the gift shop to a herpetarium/animal park and renovations to the existing theater, picnic shelters, chickees and support buildings. The current swamp buggy and airboat areas will be relocated, and a horticultural garden will be established.

Chairman James E. Billie also attended the festivities, reminiscing about the many swamp buggy, airboat and canoe trips he took while mapping and designing the original Safari during his fourth term in the early ‘90s.

Big Cypress resident and former Chairman Mitchell Cypress stopped by to say hello and posed with Chairman Billie for a photograph.

“They been talking about a decent casino out here for years,” Cypress said. “I’m glad it finally happened.”

Inside, the bells rang, buzzers buzzed, music played and coins clanked on slot machines like Deal or No Deal, Sparkling Diamonds, Survivor and John Wayne. The first big winner, Tribal member Lydia Cypress, took in a $1,200 jackpot from one of the Stinkin’ Rich machines.

“Now, no one will play that machine any more today,” laughed former Councilman David Cypress.