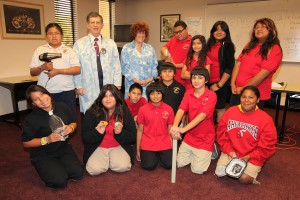 “We wanted them to gain a greater appreciation for what’s going on in the sky,” Mogil said.

With the help of How The Weather Works educational services director Barbara G. Levine, Mogil used several props to give the students an idea of how things like the water cycle and the rain come into play.

In one demonstration, Mogil captured mock water raindrops as he sprayed water into the air and it fell into a corn starch tray.

“What happened then is that the corn starch, which was in the tray, encircled the rain drops as we were capturing them,” Mogil said.

Mogil also did an experiment with a wind machine. He suspended ping pong balls in the air by generating an updraft of wind with a hair dryer. The ping pong balls represented rain drops.

The final experiment of the day was a stratus cloud demonstration using a soda bottle with water droplets in it. By squeezing and releasing the bottle, Mogil changed the pressure inside the bottle.

“The pressure change simulated the temperature change that happens in the atmosphere,” Mogil said. “So we were able to evaporate a cloud and then have it reappear again simply by squeezing and releasing the bottle.”

“If the rain drop balls are not squeezed, pressed or crushed, they can last forever,” Mogil said.

He said the Ahfachkee students showed great participation during the demonstration.

“The kids saw things they hadn’t thought about before the experiment,” he said. “They asked a lot of questions about how it all works with the weather. It really piqued their interest.”
Ahfachkee fifth-grade student Mya Cypress agreed.

“The rain drop experiment was a lot of fun,” Cypress said. “We learned that rain drops aren’t like tear drops. It was cool to see.”