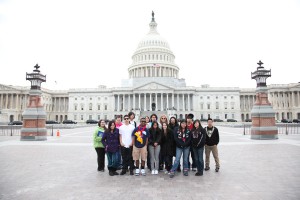 WASHINGTON, D.C. — High school students deepened their understanding of their Tribe and the U.S. government on a recent Close Up trip to Washington, D.C.

About 30 Seminole students joined peers from around the country for an educational week in the Capitol city.

“We use Washington, D.C. as a classroom to teach the students about how to become civically engaged and to become leaders in their Tribes when they return home,” said Close Up program leader Laura-Katie Whitmire.

The Tribe has participated in Close Up for several years, but this trip offered something unprecedented: the participation of the newly formed Youth Council and several Tribal leaders. Youth Council President Neyom Osceola appreciated the opportunity to interact with some of the Board and Council.

“I really want them to become more involved, so I feel really excited to finally express my issues and talk to them face to face about what I have problems with,” Osceola said.

Tribal leaders had an exclusive breakfast with the students, offering words of support and encouragement, as well as listening to their concerns and suggestions for the Tribe.

“I know it really made the kids feel good that their leaders showed up,” said Hollywood Education adviser Rob Caruso.

Students also participated in workshops on the federal government, the media, Indian policy and United South and Eastern Tribes (USET). The workshops helped prepare them to brainstorm solutions to Tribal problems, such as Indian health care, education and poverty. Students addressed tough topics like unplanned teen pregnancy and drug and alcohol abuse.

They presented their ideas to USET and Tribal leaders and U.S. government officials, including senators, congressmen and staff members.

“We’ve seen a few different community action plans that are so significant and really hit home, and the students are speaking about it with great passion to members of other Tribes and to members of their own Tribe,” said Education Director Emma Johns.

One such student presentation addressed ways to combat drug abuse among the Tribe. Students proposed conducting drug tests before Tribal members receive their dividends. If members failed the test, they would not receive their dividends and would need to perform community service or enter rehab, depending on how many offenses they had, the students suggested.

“I think that if anything comes away from it, it’s their growth and their interest in making their Tribe and their people and their communities a better place,” Johns said.

By the end of the week, plenty of positive ideas were exchanged, and the students were excited to bring their knowledge back home.

“By working with the students and seeing them grow during the week, they really gain leadership and see that they do have a voice in their federal government and they learn how they can advocate for their rights here,” Whitmire said.

The students’ trip was also packed with visits to several historic buildings, including the National Museum of the American Indian, the White House and Capitol Hill. Students admired the memorials of history’s greats, including Franklin Delano Roosevelt, Thomas Jefferson, Abraham Lincoln and Martin Luther King Jr.

“All the kids coming together from different reservations – that doesn’t happen often,” Caruso said. “Every time I come to a Close Up, I do notice the friendships and bonds that these kids make with other kids that they wouldn’t have the opportunity necessarily to make if they didn’t come on this trip, so it’s been a great asset to the (Education) Department.”

Ryan Watson contributed to this article.