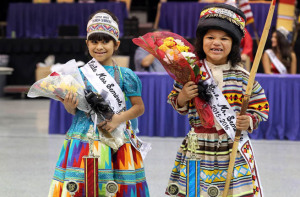 HOLLYWOOD — The 36 tiny tots vying for the 2015-16 Little Mr. and Miss Seminole titles Feb. 6 may have been small in stature, but they stood tall in their best patchwork outfits while commanding the crowd’s attention at Hard Rock Live.

After circling the arena floor twice, standing still for judges to rate their regalia and answering challenging questions about their favorite foods and their pets’ names, contestants waited patiently with poise for the results.

“Those are the basic things you need to be a representative,” Thomas said. “Personality has a lot to do with it, but it takes a lot of strength to stand in front of people.”

Although there was no talent component in the pageant, Princess Committee chairwoman Wanda Bowers expected the 5- to 7-year-old contenders to communicate clearly. Miss Florida Seminole Brianna Nunez interviewed each girl, while Jr. Miss Thomlynn Billie questioned the boys.

“At this age, they just have to be patient and able to sit during an event,” Bowers said. “They are judged on their demeanor; their parents have prepared them. They just need to be nice little people.”

The event, part of the 44th annual Seminole Tribal Fair and Pow Wow, follows a tradition begun in 1957 when the first Tribal Council elected the first Seminole princess. The first official pageant was held in 1960.

“I felt so proud of myself,” said Victoria, 6. “I practiced all year.”

Her mother, Madeline Benard, knows what the one-year reign will entail; her son Roberto is the outgoing Little Mr. Seminole.

“I like showing them off,” Benard said. “Even though it gets crazy taking them to all the events, it makes me proud as a mom.”

Roberto said he will tell his sister to speak properly and say hello.

Gregory, 6, took his win in stride.

Gregory’s mother, Charlotte Burgess, sits on the Princess Committee and is proud of her son for taking the title.