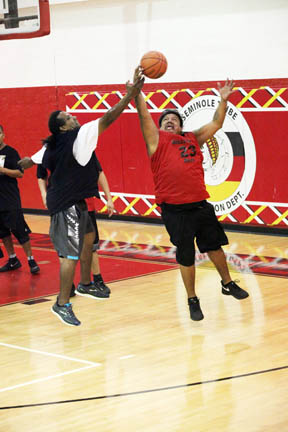 BIG CYPRESS — Appropriately, the kind of story that legends are made of emerged from the Legends Division at the seventh annual Tigertail Brothers Memorial Basketball Tournament.

A team that used only four players – including one who played barefoot – managed to win a championship.

Three women’s teams and five men’s teams in the 40-and-over category vied for Legends’ titles on opening night of the Sept. 18-20 tournament held in memory of brothers Malcolm and Duane Tigertail in Big Cypress.

The tournament, which included younger adult teams for its final two days, resumed following a one-year hiatus due to last year’s renovations at the Herman L. Osceola Gymnasium.

The Hollywood Heat found their scoring touch in the second half to win the men’s Legends championship in the waning seconds, but the women’s final featured even more drama as a short-handed Myra’s Team edged Just Playin, 24-21.

Myra Jumper, of Big Cypress, assembled her team just before the tournament. Jumper played as did Beverly “Barefoot” Alumbaugh, of Big Cypress; Michelle Osceola, of Hollywood; and Diana Neal, of Orlando.

A four-team roster meant there was extra real estate to cover. Plus, no substitutes meant no rest during all three games, but Myra’s Team was determined to overcome the obstacles.

“I thought it would be a long shot, but we were going to go for it,” Jumper said.

After opening with a loss in pool play to Just Playin, Myra’s Team rallied to top Real Legends, 25-22. Myra’s Team overcame an 11-6 deficit to advance to the championship in a rematch against Just Playin.

Just Playin held a 14-10 lead at halftime and led 17-14 following a 3-pointer from Stacy Jones, but Myra’s Team forged ahead behind a 3-pointer and layup from Neal and a late layup from Jumper that sealed the victory.

The low-scoring men’s championship game also was decided in the final seconds. The Hollywood Heat, coached by Kenneth Tommie who was unable to play because of an injury, led Str8 Chillin, 6-2, at halftime.

With Preston Baker leading the charge, Str8 Chillin took the lead thanks to a 6-0 spurt to start the second half.

The game remained tight heading into the final minute.

Arthur Thomas became the star of the night when he calmly sank a 3-pointer that gave Hollywood Heat a 16-14 lead with 16 seconds left. Thomas’ clutch basket turned out to be the final points of the game as the Heat defense stymied Str8 Chillin at the buzzer.

Big Cypress finished in third place. During a break, players competed in a 3-point contest that was won by Just Playin’s Faye Cypress on the women’s side and Hollywood’s Eric Osceola on the men’s side.

All championship winners were presented umbrellas with the tournament logo.

“They were getting bags year after year. I changed it this time,” said Minnie Tigertail, who started the tournament in 2000 after the death of her son Malcolm in an automobile accident. Seven years later the name became the Tigertail Brothers Memorial Basketball Tournament after the death of Minnie’s son, Duane.

Remembering Malcolm and Duane with a basketball tournament was a natural fit because they spent so much time on the courts.

“They played basketball a lot,” Minnie said. “Every time someone put on a tournament, they were there.”

The white tournament T-shirts, the umbrellas and several members of the Tigertail family in attendance as spectators and players served as reminders that the memories of Malcolm and Duane remain strong.

Before she doled out prizes to the winners near midcourt, Minnie played in two games in the Legends Division for the Real Legends team, which finished third.

“I don’t play anymore, but my sister wanted me to play when she put in a team,” Minnie said. “When we were younger, we used to make it to the finals.”

Just as they did decades earlier, Minnie and her sister, Mary, were teammates on a court.

“We played growing up,” Minnie said. “From about age 14 or 15, we played on Big Cypress. The gym wasn’t around; we played on an outside court.”

With eight Legends team all competing on the same night, the final game ended at 11:30 p.m. Even though most of them had to go to work in the morning, players from both sides remained until after the final umbrella was handed out.

“It is a good turnout,” Minnie said.