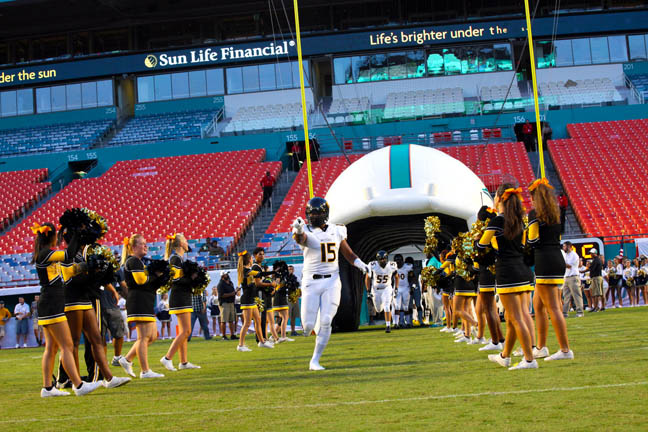 MIAMI GARDENS — Andre Jumper walked onto the tightly manicured green grass at Sun Life Stadium and saw the orange sea of 75,000 seats staring back at him. It was a moment he won’t soon forget.

Never before had Jumper been inside the home of the Miami Dolphins, University of Miami Hurricanes and the occasional Super Bowl, but that’s where the starting senior linebacker/defensive end for American Heritage School (Plantation) began his final high school season Aug. 29.

“I thought it was amazing. It gave me chills,” said Jumper, of Big Cypress, as he and his teammates – including his younger brother Blevyns – left the stadium following a 38-7 loss against national powerhouse St. Thomas Aquinas from Fort Lauderdale in the regular season opener.

A week earlier, Heritage cruised past Dwyer in a preseason game televised on ESPN, but the Patriots didn’t fare as well in the Miami Dolphins High School Series’ showdown at Sun Life. Heritage’s defense saw plenty of playing time as the team’s offense struggled to mount drives against the Class 7A juggernaut.

One highlight for Heritage came midway through the second quarter when its defense recovered a fumble. The loose ball was nearly gobbled up by Andre, but it squirted away from him amid traffic.

In the first half, the 6-foot-1, 225-pound Andre notched three tackles, including a tackle for a loss. He finished the game with five tackles. For most of the game, Andre went head-to-head against Aquinas’ massive offensive lineman Colin Byrne, a 6-foot-5, 305-pound Syracuse University-commit.

Among the 8,143 spectators who filled both sides in the stadium’s lower portion were dozens of Heritage students dressed in black and yellow T-shirts with the No. 15 – Andre’s jersey number – prominently displayed on the front. They weren’t part of a Jumper fan club, but rather energetic seniors from the class of 2015 who tried to match their Aquinas counterparts on the opposite side of the field in the vocal enthusiasm department.

Similar to his brother, Blevyns also had a busy night. Blevyns, a junior, was the long snapper on eight punts and an extra point. He had no mishaps with the snaps.

A year ago, Heritage began its season with a loss and then went on a 14-game winning streak that culminated with a victory in the Class 5A state final. Despite another season-opening setback, Heritage understands one loss won’t derail its season, especially considering it came in an NFL stadium.

“It was a good experience. I wish we would have won,” Andre said as he carried the team’s giant flag with him after leaving the locker room. “We’ll watch the film. We’ll fix the mistakes and do better. We’ll learn from our mistakes.”

The Patriots responded the following week with a 30-26 win against Miramar. They upped their record to 2-1 with a 35-8 win against Chaminade-Maddona Sept. 19.