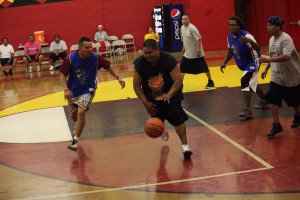 BRIGHTON — The spirit of Bert C. Jones lives on.

The event is the Tribe’s longest-running basketball tournament, along with the Herman L. Osceola Memorial Basketball Tournament in Big Cypress, also held for its 28th year this March.

As it has been for the past few years, the tournament was held in conjunction with the 74th annual Brighton Field Day celebration, said Brighton Tribal citizen Phillip Jones, grandson of the late Bert C. Jones.

Teams from Brighton, Big Cypress, Hollywood, Immokalee and Trail, as well as from Fort Lauderdale, Miami, New York, and beyond, gathered at Brighton’s gymnasium to play their hearts out into the wee hours Friday and Saturday night.

“It’s a tournament that anybody could play in,” said Phillip, who played for the B-Town (Brighton) Bad Boyz men’s basketball team. “It used to be an all-Indian tournament for many years, but we decided to open it up to everyone this year in order to get as much participation as possible. We got a lot of good competition out here.”

Twenty teams participated in the tournament, including men’s, women’s, Legends men’s and Legends women’s divisions. The men’s and women’s games were held in a double-elimination format.

B-Town was favored to win the men’s tournament, as the home squad took a 4-0 record into the title game.

B-Town, who played a late-night, first-round game against 601 on Feb. 17, outlasted teams such as I.B., Preston’s and Warriors en route to the final.

However, B-Town would have to play Warriors again in the championship game.

Warriors would eliminate Dem Boyz in the loser’s bracket before stunning B-Town in the final to take home this year’s men’s championship.

Warriors and B-Town each finished the tournament with 4-1 records.

“We were fatigued from playing all day,” Phillip said. “We had to wake up real early to play and the championship game was late at night. We beat the (Warriors) team earlier in the tournament and we had a lead on them, but we just got tired and cold in the end. It was a good and long competition with a lot of good teams out here.”

Six teams entered into the adult women’s competition. Southern Smoke defeated You Don’t Want It in the final to win the women’s championship.

Legends: Still Got It and Lady Legends take championships

In Legends play, a best-of-three competition took place within the Legends men’s and women’s divisions.

Legends men’s team Rebels played Still Got It, with Still Got It taking two of three from the Rebels after losing the first game.

“It feels good just to play competitive ball against our peers,” said Brighton Tribal member Norman “Skeeter” Bowers, who played for the Rebels. “We don’t like losing, but it’s more about sportsmanship. Win or lose, we all come out here to have a good time.”

The women’s Legends title was between Lady Legends and Brighton, with Lady Legends finding a way to avenge an early game loss to Brighton to take the championship.

“In the Legends games, I enjoyed myself out there with the ladies,” she said. “It was fun to watch the older men play as well. Overall, it was a wonderful experience for everyone, I think.”

Stacy, the daughter of the late Bert C. Jones and mother of Phillip, said she was highly pleased with the effort and enthusiasm displayed throughout the weekend.