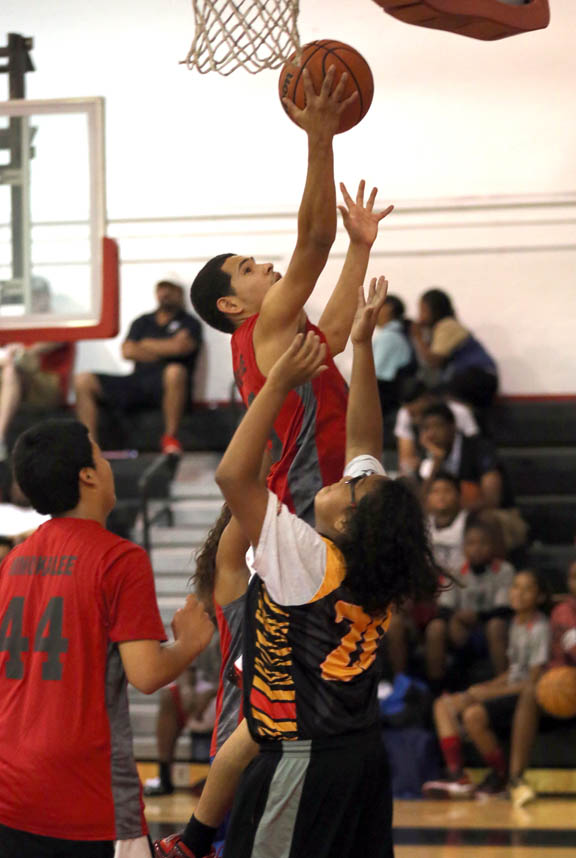 BIG CYPRESS — Kyle Alvarado couldn’t have picked a better time to soar through the lane and swat the ball away from an opponent in mid-air. The powerful highlight-reel rejection brought spectators in the bleachers and his teammates on the bench out of their seats.

The defensive gem would have been impressive in any basketball setting, but thanks to the new Recreation Summer Basketball Tournament, it came in front of players and Recreation staff from Brighton, Big Cypress, Fort Pierce, Hollywood and Immokalee.

“Our goal is that new friendships would start and give them the opportunity to go to the other reservations and see what their facilities are like,” said Salina Dorgan, Recreation Department project coordinator.

For four consecutive Mondays in June and July, youngsters age 5 through high school represented their reservations in the intra-Tribe summer league run by Recreation and Press On Sports. The series started in Brighton, shifted to Immokalee and Big Cypress and culminated July 13 with championship games at the Howard Tiger Recreation Center in Hollywood.

“It’s a good thing. I really enjoy it. It keeps kids out of trouble and keeps them busy and active,” said Kyle, of Immokalee, whose block against host Big Cypress came on July 6 when 11 teams and about 100 boys and girls filled the Herman L. Osceola Gymnasium. “It’s a new thing. You see all the different age groups playing. It’s good meeting all the reservation people.”

Kyle, who is headed into his senior year at The Vanguard School in Lake Wales, used the series to stay in shape while prepping for the upcoming high school season.

“Knowing there’s other people better than you makes you want to push yourself and get better,” he said.

Those sentiments were echoed by Brighton’s Alicia Fudge, who started for the Admiral Farragut Academy girls varsity team in St. Petersburg as an eighth-grader last winter. She said facing teams from other reservations brings out the best in players.

“It’s more intense. I have to work harder,” she said.

With reservation bragging rights on the line, games featured plenty of emotion and incentive.

“We’re all friends, but when it comes to a game, it gets competitive,” said Ricky Garza, who scored the first two points of the game for Big Cypress in its win against Immokalee. Garza played for Ahfachkee School last season as a seventh-grader.

The series provided an opportunity for Willie Lewis, 12, to excel against his peers in the 9-12 age group and face older competition in the 13-18 division, all while making new friends from other reservations.

“I get to meet new people,” said Willie, a Fort Pierce resident who scored 29 points in one of his reservation’s victories.

Willie also thrives on the youth football field as a slot receiver and cornerback for the Fort Pierce Seminoles. When it comes to basketball versus football, he doesn’t have a preference.

“Whichever one I make it in,” he said. “I’m even-handed and I’m even-sported.”

Willie and his teammates, including Roger “Fresh” Walters, Robert “RJ” Ely and Timothy Smith, used nifty passing and quick hands to lead Fort Pierce past Hollywood in Big Cypress. Whenever Hollywood made a run – such as one that featured a 3-pointer from Chade Osceola and a fast-break layup from Shannon Osceola – Fort Pierce stepped up with a swarming defense and run-loving offense.

“They’ve come a long way. You see the progress in them as far as attitudes and everything – hitting shots, playing defense. They’re learning,” Johnson said. “You see them making layups and 3-point shots. They’re handling their assignments and keeping their heads in the game.”

As for bragging rights, Brighton had the most to celebrate. Brighton reached championship games in all three age groups and won two of them (5-8 and 13-18). Fort Pierce captured the 9-12 championship against Brighton. Big Cypress was the 5-8 runner-up and Hollywood finished second in 13-18.

All tournament players received a medal and T-shirt. Team trophies were also awarded to the winners and runners-up.