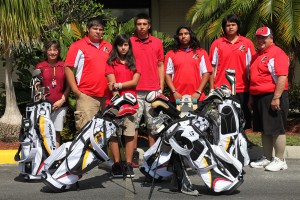 CLEWISTON — The Ahfachkee Warriors golf season – its second year of operation – ended on Oct. 13 in emphatic fashion as the team of six golfers putted its way to a 236-255 win over Heartland Christian (Sebring) at the Clewiston Golf Course.

The Tribal golf team finished its year with a 7-6 overall record – the program’s first winning season in school history, making it that more special.

“To play golf, it takes a lot of hard work, discipline and persistence,” Ahfachkee Warriors golf coach Amos Mazzant said. “Our kids were pushed beyond anything they had ever done before, but they accepted the challenge and did their very best. What they accomplished in this short season of time was nothing short of incredible.”

The team’s roster from this season, aside from Robbins and Ryanne Pratt, included Ahfachkee seniors Stevie Billie, Ryan Cypress and Taylor Pratt, as well as sophomore Quenton Cypress – all of whom comprised of the program’s first-ever Tribal golf squad.

“We put a lot of hard work into our season and it paid off,” Taylor Pratt said. “Our team came together on and off the course. We all built a better golf game and friendship. All of that helped our golf team improve our scores throughout the season. The way our season finale went down is just how we would have wanted it to end.”

Ahfachkee (2-1 at the Sept. 27 quad championship meet) beat the Clewiston Tigers – one of the odds-on favorites – in the key match. The Warriors also defeated the Moore Haven Terriers, but fell short overall as the LaBelle Cowboys took home the championship hardware.

Here are your final scores from the Sept. 27 Hendry County Golf Championship:

“Even though we didn’t win the championship, I was really happy we placed second,” Taylor Pratt said. “We beat Clewiston, which we weren’t able to do at all last season. I remember telling Stevie about how we defeated Clewiston and he gave a little scream, which I’ll never forget. We were just so excited about beating them.”

Mazzant offered some parting thoughts on how the season went down.

“This has been a very stressful season for all of us, but it was the most rewarding in that we excelled beyond our expectations,” Mazzant said. “We are extremely proud to be part of this program. It’s an honor to have the opportunity to represent the Seminole Tribe in our efforts to achieve the greatest level of sportsmanship, ability and pride.”