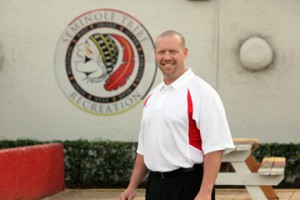 HOLLYWOOD — Brian Dodd comes to his new job as Hollywood Recreation site manager with the goal of building a solid program where kids and adults want to spend their leisure time. He brings enthusiasm fueled by his love of athletics and a desire to offer the community the best program possible.

“We get to make young and middle-age people laugh and play,” Dodd said. “Who wouldn’t want to do that?”

Responsible for programs and facility maintenance, Dodd’s plan for Hollywood includes rebuilding the program for 3-year-old children to high school students, who he will include in T-ball, baseball, softball, basketball and football programs. Dodd sees the benefit of a soccer program as well.

“It’s great for hand-eye coordination, running and laughing,” he said.

He admitted getting the older kids back into the programs could be a challenge, but he looks forward to pursuing it. With so many other options for teens, Dodd wants to create a first-class program they would want to attend. Tournaments, sports clinics, camps and organized weekly basketball and baseball/softball leagues are the starting point.

“It’s hard to compete with electronics,” Dodd said. “I want to reintroduce games to the kids by tapping into their competitive nature and get them to feel a sense of accomplishment through sports.”

Some kids have never been introduced properly to team sports and never learned the games. Dodd envisions building confidence through athletics. He recognizes not everyone will be a professional athlete, but they can still get out and have a good time.

Dodd gets inspiration and support from his family. Married to Claudia for 12 years, together they have two children: Kasandra, 11, and Zach, 7.

He credits his parents for putting him in athletics at a young age so he could learn discipline and the importance of hard work. Dodd was moved by the Rocky movies as a child, which taught him to work hard and not give up. His strong faith also plays an important part in his life. With all this depth, Dodd will likely meet the challenge of the job with confidence and good humor.

“This job to grow the program is great,” Dodd said. “We have a great staff, facilities and an opportunity in front of us. With all three together, it’s going to be pretty cool.”