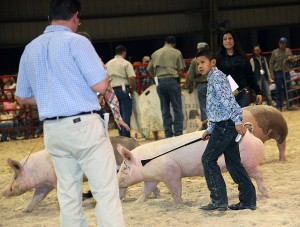 WEST PALM BEACH — Youth in 4-H spend a lot of time and energy raising and caring for livestock, with the goal of bringing them to market after about 100 days. Nine Seminole kids and their hogs joined 107 others at the South Florida Fair in West Palm Beach for the Youth Market Animal Program Hog Show and Sale from Jan. 25-26.

Children between the ages of 8 and 18 competed in the show, which was open to everyone, not just 4-H members. Each purchased a 3-month-old pig and fed, groomed and exercised the animal. They kept detailed record books, outlining each expense during the 100-day period.

“The kids learn responsibility,” said Melonie Hamlett, 4-H leader in Immokalee. “The pigs are locked up in a pen and can’t fend for themselves. The responsibility of caring for the animals is a big thing for the kids.”

The young pigs weigh about 75 pounds in the beginning, about the size of a German Shepherd, but they gain weight quickly. By the time they go to the show, the hogs weigh between 230 and 300 pounds. To keep the animals in good shape, the kids walked them every day for about 30 minutes and practiced guiding the pig with a stick as they must do in the show ring.

Although kids spend a lot of time with the animals, they are not pets. From the start, kids learn that raising the pig is a business venture with the purpose of making a profit.

“You always need to get it food and water and brush it daily so the oils get into the skin,” said Valholly Frank, 10, of Big Cypress, who showed a hog for the first time. “I let the pig exercise by letting it out of the pen so it can run around and get all its energy out. Then I walk it with the stick. It like it, but walking it is the hardest part.”

In addition to learning responsibility, youth honed math and bookkeeping skills. In record books, they tracked the cost of the pig, food, wormer pellets, brushes, show sticks, pans, shampoo, clippers and other grooming supplies. If they had a veterinarian bill, that cost is recorded. They also have to depreciate the cost of the items they use from year to year, such as the clippers, by 10 percent.

Because the hogs normally sell between $3 and $7 per pound, profits are not guaranteed. The young pig initially costs about $210, the 14 bags of feed they need cost around $212 and wormer pellets added to the feed cost $5 per bag; the costs add up, which affects the profit margin.

At the South Florida Fairgrounds, classical music played in the cavernous barn as pigs spent show day dozing, getting bathed and behaving like swine. The cacophony of pig-emitted sounds easily drowned out the calming music. Despite the noisy atmosphere, the Tribal kids made sure they and their hogs were ready for their big moment in the show ring.

“You get to work with the pig and go to the fair,” said Troy Cantu, 12, of Immokalee, who showed a hog for the third year at the South Florida Fair. “Selling them is a little hard because you love them. Keeping the record book is the hardest part.”

“We learned responsibility and that we have to be on time,” added his sister Rosalinda Lopez, 16, who also showed a hog for the third year at the South Florida Fair.

During 4-H meetings, kids learn the basics of showing a hog and get showmanship tips.

“I tell them to extend your arm with the show stick to turn the pig,” said Hamlett, who was the 4-H leader in the city of Immokalee for 18 years before she joined the Tribe four years ago. “Keep your eye on the judge. Keep your shirt tucked in. Don’t kick the pig, don’t knee the pig and don’t touch the pig with your hands or any other body part to get it off the fence in the ring.”

For the show, hogs were divided into classes by weight and were presented to the judge in the ring as a group. After determining showmanship scores for the kids, the judge noted how each hog was built, gauged the amount of fat to meat and assessed the overall quality of the animal.

“It’s her first year, so it’s been quite a learning experience for her,” said Big Cypress Board Rep. Joe Frank, Valholly Frank’s father. She took second place in her weight class.

Brighton resident Rosa Urbina, 17, has showed hogs since she was 8 years old and has showed for five years at the South Florida Fair. Because she will turn 18 in May, this was her last time showing at the fair.

“I like coming to show. I have fun getting out there in the ring and showing my project to people,” she said. “It’s exciting and a little sad that this is my last show here.”

Her mother, Emma Urbina, has been through this with all her children.

“It’s time consuming, but as a parent you have to do what you can for your kids,” said Urbina, of Brighton.

Dionne Smedley had two children and a granddaughter at the show.

“It’s a family thing,” she said. “All my kids have shown since they were 9 years old. It can be stressful. I put a lot on my daughter; she helps a lot.”

“We always appreciate the support of Tribal members for the youth programs,” Hamlett said. “Everyone was very pleased with the result of the sale.”

The kids all brought home the bacon after the fair.