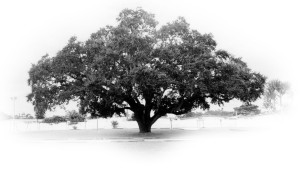 HOLLYWOOD — Near the southwest corner of the intersection of State Road 7 and Stirling Road, roosts a precious historical icon of the Seminole Indians. In a tiny landscaped park, surrounded by a vast casino parking lot and facing a gigantic Hard Rock guitar, a gnarled ancient live oak tree extends spreading branches like a great hawk stretching the sinews of its feathery wings. The Council Oak Tree stands strong and royal, a symbol of the strength and stability of the organized Seminole Tribe of Florida.

It was here in the 1950s, beneath these same shady branches, concerned and determined Seminoles would gather, regularly, to argue, discuss and ruminate on the creation of a unified Tribe. These were the sons and daughters of the last generation of Seminole Indians to live in the Florida outback, chased into hiding in the mid-1800s. Historians say the Council Oak, as the tree became known, was probably standing here in 1828, when Seminoles first settled the area, then known as Big City Island. Similar community discussions were held at Brighton and Big Cypress gathering spots – barns built in the early ‘40s by the federal Civilian Conservation Corps.

In 1957, Florida Seminole Indians including Bill Osceola, Billy Osceola, Betty Mae Jumper and Laura Mae Osceola, approached Glenn Emmons, Commissioner of Indian Affairs for the U.S. Department of the Interior. They wanted control of their own affairs. Emmons sent Sioux Indian Reginald “Rex” Quinn, from the Tribal government branch of the Bureau of Indian Affairs, to assess the request and assist the Seminoles in drafting the constitution and bylaws necessary for self-government. Quinn, who worked with Seminole leaders on all three reservations (Dania, Big Cypress and Brighton), came to the consensus that Seminoles were in favor of self-government.

A meeting was set up with the Seminoles under the Council Oak Tree in 1957, which he recounted 20 years later through the University of Florida Oral History Program:

“I got to the agency at 2 in the afternoon, and the Indians were there from all the reservations, and we met under the old oak tree. This was a very colorful meeting. The Seminoles were there in native dress. It was a natural meeting. There were no chairs or anything. There was a small table and a couple of chairs for me and the superintendent to sit on. The rest of them were either standing or sitting on the ground. Bill and Laura Mae and Billy got up, and they explained to the group what had transpired and that they were now in a position to go ahead with the process of setting up a Tribal government.

Quinn’s guidance was critical in helping the Seminoles arrange their Constitution and bylaws; he also helped the fledgling government establish a corporate charter. According to Harry Kersey in his book “An Assumption of Sovereignty,” some say Quinn recommended a two-tiered Tribal Council and a Board of Directors arrangement, while others say the Seminoles came up with the idea on their own. Either way, the new Seminole Tribe of Florida had both a governing body called the Tribal Council, pursuant to the Constitution and bylaws, and a Board of Directors pursuant to a corporate charter.

Florida Seminoles ratified their Constitution and bylaws by a ballot system of voting on Aug. 21, 1957. The Constitution received 241 votes in favor and only five against. Billy Osceola was elected Chairman, Bill Osceola was chosen President and Laura Mae Osceola became Secretary-Treasurer. The Tribal Council then replaced the Council of Elders as the governing body. On the same day, the Seminole Tribe of Florida was issued a corporate charter, which was ratified by a vote of 223-5. The historic documents were all signed, on long tables, beneath the spreading branches of the stately Council Oak.

The meetings at the Council Oak paved the way for the success of the Seminole Tribe of Florida. The first smoke shop on a Seminole Tribe Reservation opened in 1977. The first gaming establishment in Indian Country – high-stakes bingo hall – opened two years later right behind the Council Oak. These pioneering ventures grew into the Tribe’s lucrative casino business, an astounding economic destiny that sprung from the rowdy community meetings that took place beneath the Council Oak in the 1950s.

The Council Oak is still a functioning site today. In 2004, to honor the 25th anniversary of Indian gaming, a celebration was held at the tree and a plaque was added to the site.

For the past two years the Tribal Historic Preservation Office (THPO) has worked with Earth Advisors Inc. arborists to ensure the health and preservation of the tree. Earth Advisors conducts monthly evaluations of the site to monitor the health and condition of the Council Oak tree and the surrounding landscape area and to further recommend specific maintenance tasks that this historic tree requires for long-term survival. By making critical changes over the last two years – including removing a damaged leader, reducing the amount of mulch at the base of the tree, getting rid of the underground light system that damaged the root system and implementing a new maintenance plan – the health of the tree has increased dramatically.

THPO worked throughout 2012 to prepare a nomination to the National Register of Historic Places for the Council Oak Tree site. The tree was eligible as a property associated with events that have made a significant contribution to the broad patterns of history.

The Council Oak Tree site was awarded a listing in the National Register of Historic Places on Dec. 4, 2012. The Seminole Tribe strives to preserve this critical piece of Seminole history to ensure the mighty oak remains an icon for generations to come.