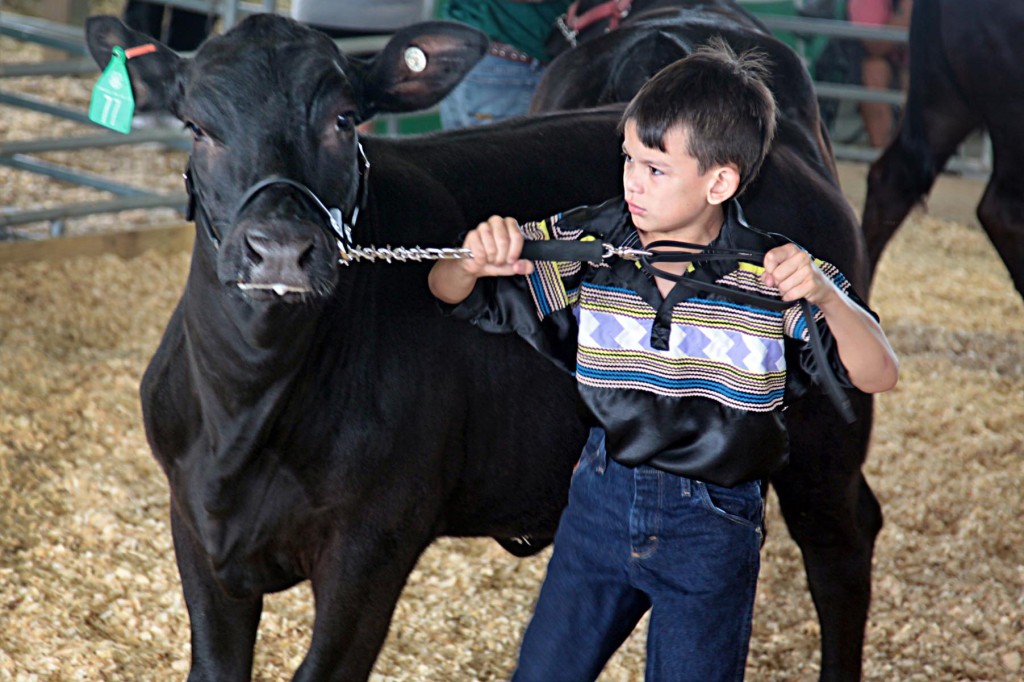 More than 100 kids tribalwide convened in the ring to parade their small animals, hogs, heifers and steers for judges while parents, grandparents, friends and relatives filled the stands.

The Hollywood 4-H’ers tended to their hogs every day in the newly built pig pen on the former Seminole Estates site.

“It teaches them responsibility,” said Polly Hayes, 4-H coordinator. “The Hollywood kids took right to it and even though some of those animals got sick, they stayed with it.”

The 4-H program teaches youth the business of livestock. In addition to taking care of the animals’ basic needs, kids track expenses in logs, and at the end of the program, they sell the animal and pocket the profit. Most animals sold during the 2014 sale.

“It’s hard getting ready for the show,” said Kimora Alex, 8. “We had to clean, walk and feed them a lot. Now we get to sell them.”

Children begin the 4-H program with small animals like hamsters, chickens, rabbits, goats, puppies, piglets and calves. At age 8, they upgrade to hogs or heifers. At 10, kids can raise steers.

Deliah Carrillo, 16, raised hogs for six years but decided to try a steer this year for a change. Her steer was the second largest in the show at 1,398 pounds.

“You have to work them every day or you’ll be dragged around,” she said, adding that raising a steer was more interactive than working with a hog. “If you miss a day he stops being used to you. But he’s a big baby and lets me sit on him.”

Deliah grew attached to the animal, but she understood it was a business venture.

“I thought I wouldn’t care about letting him go. But now that we’re here, it’s hard,” she said. “But I know he’ll make good meat.”

Alyssa Gonzalez, 11, showed nearly every type of bovine: a steer, a yearling heifer and a 3-year-old with a calf. She plans to breed the yearling, show her next year as bred and the year after that with her calf.

Jarrett Beecham, 8, showed his first large animals, a yearling heifer and a hog. In the ring he did his best to lead the cow, but she had a mind of her own.

“I was nervous; it was my first time,” he said. “She is really stubborn; all she does is moo and eat. Once she ate a whole bucket in five minutes.”

The judges rated animals based on appearance, explained the structure of each animal and related it to cuts of meat. Eye appeal, structural integrity and heavy muscle don’t always translate into better quality meat, but they do lead to a better life for the animal, said judge Pat Hogue.

Hayes has taught 4-H kids for about 25 years, since her son Hollywood Board Rep. Steve Osceola showed his steer in Clewiston as a child.

“It’s rewarding when I see the children of someone I taught when they were kids and their grandchildren,” Hayes said. “Many of them complete the program and some go into agriculture or the cattle program. They love their animals.”