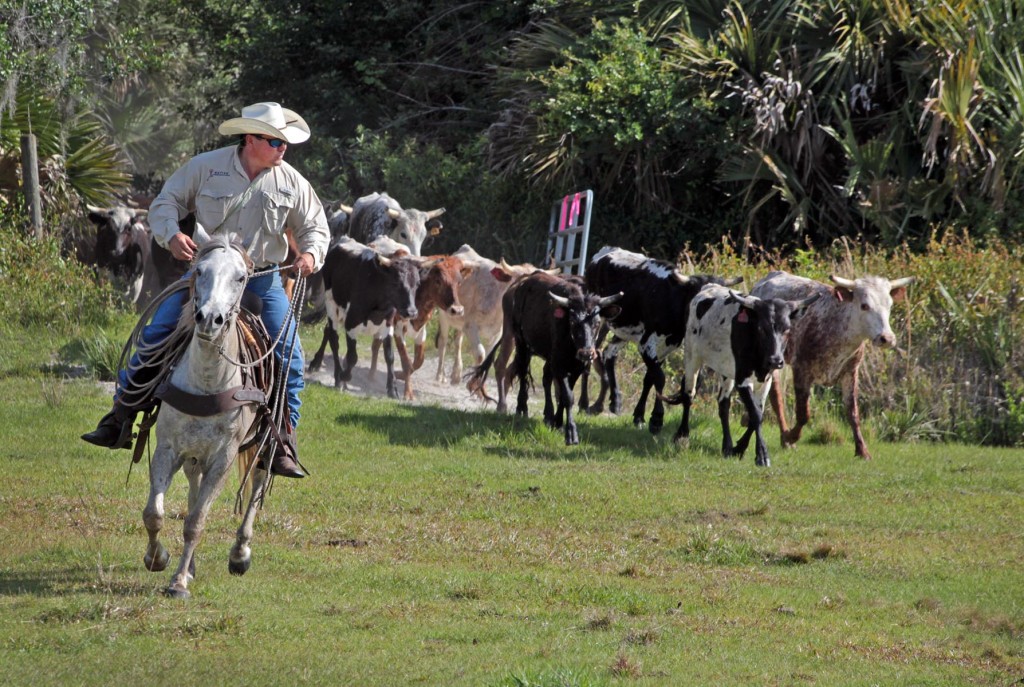 BRIGHTON — The Smith family legacy is evident from the pastures and rodeo arena in Brighton to the Tribal halls of power.

Family patriarch Jack Smith Sr. was a pioneer of the Seminole cattle industry and his sons Fred, Jack Jr., Richard and Roger were also cattlemen who served the Tribe as elected leaders.

To honor the work of the Smith men, Diane Smith, Roger’s widow, organized a cattle drive and ranch rodeo April 4-6 in Brighton. The large extended family showed up in force during the weekend’s festivities.

“They kept us together, that’s why we stay together,” said Camellia Smith-Osceola, Fred’s daughter. “They taught us how to carry on, so we do.”

The cattle drive took participants through the Brighton Reservation as it once was – filled with scrub, pine trees, cabbage palms, oaks, wild turkeys and signs of wild hogs. Long before cattle owners kept their herds in open pastures and cow pens, they battled rough terrain every day.

“Eighty years ago there were no fences and an abundance of water everywhere,” said Norman “Skeeter” Bowers. “Cowboys had to stay with the cattle while they grazed and set up camp.”

“The cattle could get away from you because you couldn’t see them,” added Alex Johns, Natural Resource director and trail boss for the cattle drive. “This was the best cattle drive I’ve been on outside of normal work.”

Working dogs ensured cattle stayed together. They barked, nipped and chased any cow that broke away from the herd.

Once the cattle arrived safely in the pen at the Fred Smith Rodeo Arena, about 150 people including Smith family members, cattle drive participants and other community members commemorated the event with heartfelt tributes to the Smith men.

Fred Smith served as President of the Board of Directors for 16 years – longer than any other president – and helped diversify the Board’s ventures. He also served as Brighton Councilman and helped establish the Brighton rodeo arena.

“Roger stood tall in my eyes and for the Tribe, too,” said Richard Osceola, a friend of Roger Smith. “That family now stands tall in my heart.”

Brighton Board Rep. Larry Howard remembered watching them interact when he was a child.

“They always cared about everybody,” he said.

The event was the second cattle drive to honor the Smith family. Diane Smith was pleased with the crowd and the sentiments they shared.

“People had a lot of nice things to say,” she said. “The turnout was better than I expected, and I hope it gets bigger every year.”

Accolades came easily from those who knew the men.

“I still miss Roger,” said Richard Bowers. “He had a knack for getting people together and here we are again.”

Judging by the turnout and atmosphere of the weekend’s activities, the Smith family tradition of cattle and service will live on.

“The Smith family is about leadership,” said Amos Tiger, director of the Fred Smith Rodeo Arena. “Look around and you can see it here.”