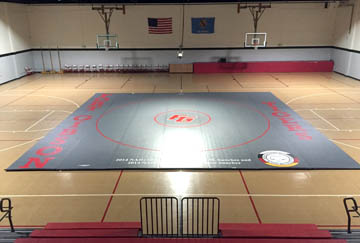 FORT GIBSON, Okla. — The Seminole Tribe of Florida’s presence on the wrestling mat at Fort Gibson High School is prevalent in several ways.

Not only does the Oklahoma school’s wrestling team feature Tribal members Sammy Micco Sanchez and his brother Jesse Sanchez, but the program now has a new mat thanks to the Tribe.

Fort Gibson wrestling coach Sammy Johnson said the Tribe donated $10,000 to the program for the purchase of the mat, which replaces one the team used since the mid-1980s.

“It’s an awesome gesture. We’ll get to use it for the next 30 years,” said Johnson, whose team rolled out the new mat in competition toward the end of its season.

The team had been considering fundraising ideas to buy a mat, but then the Tribe stepped in. Frank Cabal, Jesse and Sammy’s stepfather, surprised Johnson with the news.

“The school was in need, and the Tribe has been very successful, and any time we can help someone out, we’ll try to make it possible,” Seminole Tribe of Florida, Inc. President Tony Sanchez Jr. said.

President Sanchez watched his nephews win medals in wrestling at last summer’s North American Indigenous Games (NAIG) in Canada. Those accomplishments – Sammy won gold; Jesse won silver – are noted on the new mat next to the Tribe’s seal that is prominently displayed.

Johnson trained and coached Sammy and Jesse at NAIG. As appreciation for Johnson’s efforts, the boys presented their coach with a plaque during the team’s banquet April 10. The presentation also included the boys’ mother, Alicia J. Cabal, school principal Gary Sparks and Fort Gibson superintendent of schools Derald Glover. The plaque was provided by the Seminole Recreation Department.

Sammy recently completed an impressive freshman season. He placed fourth at regionals and was the only freshman in Oklahoma’s Class 4A to qualify for the state tournament.

Jesse, a sophomore, did not wrestle this winter because of an injury he suffered during football season. Jesse, a running back, and Sammy, a linebacker, helped Fort Gibson’s football team to a 13-1 record last fall.

“I’m very, very happy about how my nephews are performing out there with school and wrestling and football. They’ve just been very successful,” said President Sanchez, who also played football and wrestled when he was in high school.

Even though his team’s wrestling season ended in early March, Sammy has remained busy on the mats along with his brother. In March, they competed in the National High School Coaches Association’s National Wrestling Championships in Virginia Beach, Virginia. Jesse won two matches in the sophomore 170-pound class. Sammy won three matches and placed seventh in the freshman 195-pound division. He earned a Freshman All American honor.

Sammy’s performance also netted him an invitation that will take him a long way from America’s heartland. He was selected to be part of an Oklahoma contingent that will compete in a wrestling tournament this summer in Australia and New Zealand.

“For kids to have an opportunity to travel to other parts of the world, I think that’s a great opportunity,” President Sanchez said. “You want to see that life is much bigger than the reservation or the small town that you’re raised in. I wish him all the luck in the world.”