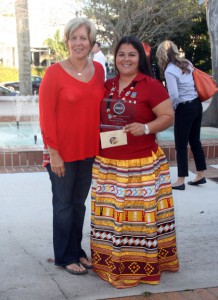 NAPLES — The Naples community received special recognition for their outstanding contribution to the annual City of Naples Christmas Parade, which took place on Dec. 18.

The Naples holiday parade is a tradition that spans more than 60 years. Covering a broad spectrum of themes encompassing local history, the Heritage Award was established in 2009. The Seminole Tribe of Florida has taken home the trophy for four consecutive years.

“During the past 60 years, Collier County has become a destination for multiple cultures that bring an international flavor and blend of social experiences to the area,” said Sun Trust Bank vice president Raul Medina. “However, more than 150 years earlier, the ancestors of the Seminole Tribe were among the first people to recognize the potential of South Florida. Their descendants still play an important role in not only its history but its present. Their unique entries in the annual Naples Christmas Parade mean a great deal to the community and are a highlight of the event for the thousands of spectators along the route.”

The 2012 float featured a Seminole chickee adorned with brilliantly lighted snowflakes and holiday garlands. Displaying a hand-crank sewing machine, Seminole patchwork, baskets, wood carving and beadwork, the float emphasized the traditional crafts that sustained the Tribal economy for many years.

The colorful Seminole clothing of the adults sparkled like Christmas ornaments as they walked beside their children on the float broadcasting holiday greetings to the enthusiastic spectators.

“I want to commend the Seminole Tribe on their awesome parenting and educational awareness,” said local merchant Julie Roberts. “I look forward to bringing my kids each year to the parade where they can enjoy the holiday season and learn about our local history from the Seminoles. It appears that all of their family members participate in their parade entry which has a historical, artistic and educational theme. Each year is different and shows originality while putting their cultural fingerprint and talent to work. Congratulations on a job well done.”