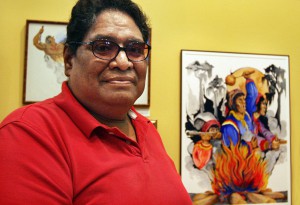 “It’s what runs through my blood,” Storm said.

More than a dozen works by Storm, all depicting scenes from the Seminole Tribe’s fight to survive under the wrath of the U.S. government, were featured in the Mosaic Gallery at the Ah-Tah-Thi-Ki Museum in Big Cypress.

In one piece, Storm brings three leaders into one canvas. Seminole warriors Alligator and Jumper – who led about 500 Seminoles on Dec. 25, 1837, against 1,000 federal troops in the Battle of Okeechobee – are painted side by side with Chief Osceola as a fierce and undefeated triad. Osceola was already held as a prisoner in South Carolina where he died in 1838.

“We are not a defeated people. By far we have never been rich either – with money, that is. We are people of the earth. Our riches are the woods where we built homes and fished for food,” Storm said.

In another piece, Storm uses disciplined pointillism to recreate a photograph of a sickly Osceola during his incarceration. In Storm’s version, Osceola is a young, muscular warrior full of energy and spirit.

The next show at the Mosaic Gallery will spotlight artwork from Ahfachkee School students.