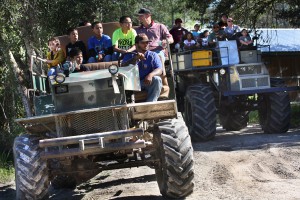 BIG CYPRESS — Lions, tigers and bears – not exactly, but during winter break camp on the Big Cypress Reservation children did get eyes full of vultures, deer, wild pigs and buffaloes during Wildlife Adventures day in the ‘Glades.

The two-hour event, hosted by the Big Cypress Wildlife Department and the Recreation Department on Dec. 27, gave more than a dozen children an up-close view of the reservation’s open vista and thick hammocks.

Safely buckled into huge-wheeled swamp buggies, kids craned their necks to spot creatures of the swamp and pasture.

“It’s a great way to give the kids a day in the woods,” said Carlton Banks, an aide for the Recreation Department.

“We want to see the kids grow up to be smart and good hunters,” Banks said.

Tribal member Celeste Billie, assistant to Wildlife Department director Randall Osceola, said the outing teaches Tribal children that there must be a healthy, respectful balance to wildlife and humanity.

“We’re trying to get kids more involved in our culture and the outdoors,” Billie said. “They come out here, learn to respect nature and that when they take from nature, they must also give back because we are nature’s keepers.”

Getting children away from watching television and playing video games is a good start, she said.

Tribal children are treated to swamp buggy adventure trips at the wildlife preserve at least three times a year: during spring, summer and winter breaks from school. There, they experience archery, outdoor survival skills and Tribal culture.

In the past, the area was used by the Tribe and outsiders for hunting deer, pig and other food, such as quail and wild turkey. In fall 2011, the area became a semi-refuge, in which hunting for anything other than wild pig is not allowed without special permission. The move aims to allow wildlife to repopulate.

“We have always been one with nature,” Billie said. “We are connected so we have to pay attention to every little thing and balance out so when the next generation comes up, they will have what we always had.”

Plans are in the works to create parent and child programs that will include cultural arts events and wildlife experiences.