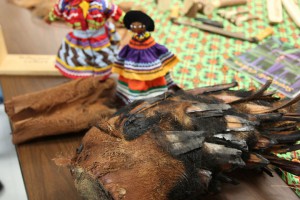 HOLLYWOOD — In a room that smelled of wood and frybread, Tribal seniors and youth gathered to celebrate Seminole culture. It was the Hollywood Culture Department’s Community Culture Open House on June 20,  and a group of children from the reservation’s summer camp came early that morning to visit. Spread around the room were sewing machines, patchwork, beads, a carving station, Indian dolls and baskets.

The event – open to anyone interested in the demonstrations, discussions and traditional foods – brought Seminole history into the limelight. Cultural director Bobby Frank said he finds it tremendously important to raise the youth’s awareness of their identity and heritage.

“[This event] is the stepping stone,” he said. “We guide them to ask questions.”

Tribal members ages 6-13 learned the basics of their native language, Mikasuki, from LaToyia Stewart (Bird Clan), a teacher for 5- and 6-year-olds at the Culture Department. The children learned how to say hello, thank you and the Pledge of Allegiance, as well as how to count. Paul Buster, teacher of 2-year-olds with the Culture Department, spoke with the Tribal summer campers about the importance of language. For lunch, Tribal members Myra Frank, Donna Turtle and Shannon Tiger cooked frybread, chili and sofkee over an open flame.

After the children left, Tribal member Mabel Osceola held her own demonstration of how to harvest palm fibers from a palm tree. Using a small hatchet, she showed onlookers which pieces to use and which techniques to employ. Osceola then gave a brief history on how for generations before her, Indian dolls were made and sold during times of hardship for profit. They symbolized Seminoles’ ability to survive.

Frank aims to inspire the youth to be curious, ask questions and discover themselves in a cultural approach. He believes that passing time doing traditional activities and speaking with elders are the best ways to get in touch with Seminole culture.

“Ask seniors how they grew up, to elaborate on old days,” he said.

The event showcased activities that youth were encouraged to participate in, such as fishing in the Everglades, picking sweetgrass for weaving baskets and harvesting palm fiber for constructing dolls. Frank said he wishes for the children to learn and understand the process of gaining such important materials – not just what they’re used for. Such understanding leads the way toward the goal of the Culture Department: to pass on knowledge.

“Come over. We’re here,” Frank said as his ending remark.

Among the turquoise beads and unfinished baskets, the Seminoles at the Culture Department wear their culture with pride. They only hope their future leaders will do the same.