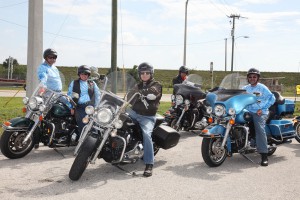 Held on Nov. 5, a somewhat somber vibe existed throughout the weekend experience as many of the motorcycle riders – friends and family members of the late Jerry Micco Sr. – talked about how they also missed Vincent Micco, who spearheaded the function over the course of eight years.

For Loretta Micco – wife of the late Vincent Micco who passed away in a motorcycle accident this past August – this year’s ride was filled with a mix of emotions. Receiving a host of hugs and encouraging words from her fellow riders, Loretta Micco opened up on what the experience meant to her.

“Everybody feels it,” she said. “We’re still mourning, yet we want to carry on. It’s been only two months, but I’m still heartbroken over what happened to Vincent. I have been thinking about him every day from the start. I’m pretty sure all of the riders do as well.”

Loretta Micco said she never doubted that the Jerry Micco Sr. Memorial Bike Ride series would continue, despite the untimely loss of her husband.

“The family said Vincent would want it to continue, even if he wasn’t here with us,” she said. “They felt it would be a good way for their family and the riders to honor him.”

“This is a fun way to remember Vincent and his father,” Osceola said at the Seminole Gaming parking lot. “Everybody here loved to ride bikes. Vincent wanted to remember his father by doing something that was fun and encouraged camaraderie. Vincent was always making fun of himself and other people. It’s a beautiful day out here and I believe this is something Vincent and his dad would want us to do in their honor.”

The starting point of this year’s ride was at the Seminole Gaming Headquarters parking lot, located on the corner of North 64th Ave. and Sheridan St. in Hollywood for a pre-breakfast, followed by a meet and greet gathering.

That was followed by a pit stop at the nearby Hollywood Reservation and a visit to Vincent Micco’s gravesite, located at the New Seminole Graveyard – just north of the Tribe’s headquarters.

“The family wanted to honor Vincent by starting on the reservation and putting flowers on his gravesite,” Loretta Micco said. “It’s too hard for me to speak about Vincent without crying.”

The two early stops were a stark contrast to last year’s bike ride, when everyone involved met at and started the day-long function at Holiday Park.

All riders eventually trekked their way to U.S. 27, a long and winding road they traveled northbound from Interstate 75 to a key pit stop at the Valero truck stop/gas station in South Bay – a span of more than 50 miles.

The rest stop, one of several, allowed riders and family members to freshen up, get some laughs in and talk about a variety of happy moments that transpired from the 215.5 mile-long motorcycle ride.

The riders then continued on after the break, as they traveled through the Lake Okeechobee communities of South Bay, Belle Glade, Pahokee, Canal Point, Port Mayaca, Okeechobee, Buckhead Ridge, Lakeport and Moore Haven.

Stops were made at Port Mayaca for a group photo shoot and at an Okeechobee gas station before heading to the Ortona Cemetery, where the late Jerry Micco Sr. was laid to rest in 2001.

The brief gravesite stop preceded the ride’s final two stops, which were at a gas station in Moore Haven and an end-of-ride dinner/gathering at the Billie Swamp Safari in Big Cypress.

“It was first time I rode down Snake Road since Vincent passed,” Loretta Micco said as she fought back tears. “It was really hard, but God has given us strength each day to get through it. We’re all still shocked that we’re here without Vincent. But one thing I do know is that both Vincent and Jerry are in heaven together. It gives us hope because we’ll get to see them again one day.”