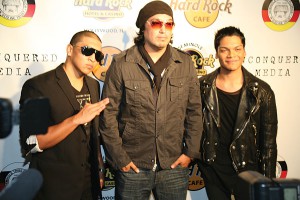 SAN FRANCISCO, Calif. — The Storm, the song and video production starring Seminole Tribal citizens Spencer and Doc Battiest, and directed by Stephen Paul Judd, was awarded Best Music Video of 2011 at the 36th annual American Indian Film Festival. The Battiest Brothers performed live before a capacity crowd at the American Indian Motion Picture Awards on Saturday, Nov. 12 at the Palace of Fine Arts in San Francisco.

“It was a real honor to be honored by the American Indian Film Institute,” said Zachary “Doc” Battiest. “We’ve been to award shows before and came close, but we never were able to bring one home. And the award we won was one of the most important!”

Performing live before Natives from around the globe added to the joyous occasion. “We got one of the only standing ovations of the night, and I can’t describe how great it was to hear all the different nations doing their calls,” added Doc. “You could hear the Osage, the Sac and Fox, the Inuit from up near the Arctic Circle, the Pomo Nation, each one doing their Tribal calls. And the woman lu-lu-ing, you could hear them all! It was incredible: one giant applause with the whole place standing!”