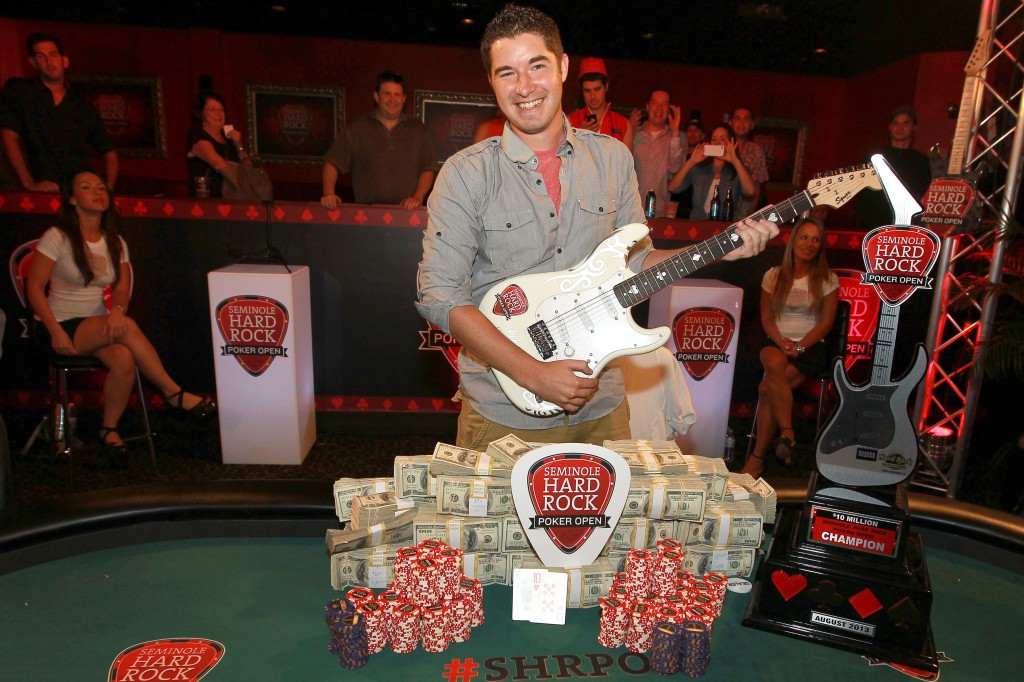 HOLLYWOOD — Lynn Hinkle insists her son Blair has a lucky charm: her.

Every time he has won a final table in a poker tournament, she has been in the audience.

“I was at his first World Series of Poker win in 2008 and when he won the second time this year,” Lynn said.

Lynn and other family members cheered Blair on from the gallery throughout the 10-hour finale – his biggest win to date.

“When he told me he made it to this final table last night after midnight, I booked a flight and came down here today,” Lynn said.

The final game was challenging, as the lead kept changing from Blair to his opponent Justin Bonomo and back again. He didn’t let the volatility of the lead affect his focus.

“It’s a game of swings, of ups and downs,” said Blair, 27, of Kansas City, Mo.  “I play each hand without worrying about what happened before.”

His brother Mason was in the gallery and with every victorious hand he bellowed, “Oh yeah,” in support of his big brother.

“We had to keep the adrenaline pumping for him,” said Mason, 23.

The Hinkle brothers, Blair, Mason and Grant, learned to play poker from their grandma Sue Johnson, who brought out a jar of pennies and played go fish and gin rummy with her grandchildren regularly.

“She was ruthless and never let them win,” Lynn said. “I think that’s what made them more competitive.”

Grandma Sue may be a card shark, but she takes great pride in her grandson.

“She left me a message at 7 a.m.,” said Blair the day after his win. “She used to play her hardest even when she was playing against children who didn’t know what was going on.”

“It’s the toughest home game in the world,” Blair said.

Lynn was not pleased when Blair announced he was leaving college to play poker in 2008, but when he won his first tournament that same year, she learned to trust his poker instincts.

“He’s always been a math genius,” she said. “But he’s also a very sensitive guy, pays close attention to things, focuses well and has a lot of patience. I think that’s a good combination for poker.”

Upcoming events for Blair include playing online poker in Vancouver, Canada and possibly the World Series of Poker Europe in Paris in October.