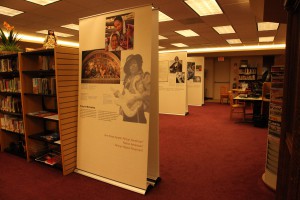 BIG CYPRESS — Throughout history, the lives of Native Americans and African Americans have intersected. Their rich histories are seldom on display together, but thanks to the National Museum of the American Indian, pieces of their past can be seen at the Willie Frank Memorial Library in Big Cypress and the Diane Yzaguirre Memorial Library in Immokalee through the “IndiVisible: African-Native American Lives in the Americas” exhibit.

“The exhibition shows how the Native and African Americans’ identities are interwoven,” said Gretchen DeBree, Big Cypress librarian. “We have half of the 20-panel exhibit in Big Cypress and the other half in Immokalee and will switch them out after a month so both communities will see the entire exhibit.”

Billy Bowlegs III (1862-1965), a descendent of African and Seminole parents, adopted the name of Billy Bowlegs II, a Tribal leader during the Seminole Wars. A member of the Snake Clan, his grandfather was Chief Osceola.

John Horse, a slave of African, Seminole and Spanish descent, played a paramount role in the Second Seminole War of 1835-42. As a leader of the other escaped slaves who became known as the Black Seminoles, Horse advised Chief Osceola during the war. Unwilling to accept a restricted life of defeat in the Oklahoma Indian territory, he led a band of Black Seminoles into Mexico. Once there, he used the alias Juan Caballo and lived in Mexico the rest of his life.

Through the themes of policy, community, creative resistance and lifestyles, IndiVisible relates stories of cultural integration and diffusion, as well as the struggle to define and preserve identity. Since the arrival of Christopher Columbus in the Americas, Native and African people intermarried, established communities and shared lives and traditions. The exhibit outlines their survival strategies and involvement in social movements to fight oppressive conditions and racially motivated laws.

The exhibit, on display through Nov. 23, was produced by the Smithsonian’s National Museum of the American Indian, an institution of living cultures dedicated to advancing knowledge and understanding of the lives, languages, literature, histories and arts of the Native peoples of the Western Hemisphere.