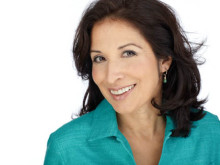 Hattie Kauffman has the distinction of being the first Native American television reporter to file a story on a national evening news broadcast, but she hopes she won’t be the last.

“Our culture is vibrant with storytelling; that’s what reporting is,” said Kauffman, a four-time Emmy Award winning journalist and member of the Nez Perce Tribe. “I often talk to Native American kids and encourage them to go into the news business. That’s our culture; we are storytellers.”

The story by Kauffman in 1989 that turned out to be historically significant reported on an airliner whose fuselage peeled back after taking off from Hawaii. It aired on ABC’s evening newscast. Unknown to Kauffman, she had broken a barrier for Native American journalists, and the story was later featured in a display of firsts at the Newseum in Washington, D.C.

“I was just doing my job. I didn’t know I had broken that barrier until they called me years later,” she said.

During her childhood, Kauffman’s parents moved the family of seven children between the Nez Perce Reservation in Idaho and Seattle. Those years gave her a strong work ethic.

“We were a poor, urban Native American family,” Kauffman said. “I always knew I had to work. I didn’t want to go back to poverty.”

Her journalism career began with a scholarship to the University of Minnesota, an internship at WCCO-TV in Minneapolis and an apprentice program at KING-TV in Seattle, which led to jobs as general assignment reporter and news anchor.

Kauffman said she learned to report without bias. As a reporter covering a fishing dispute between Native American Tribes and Washington state in the 1970s, she had to remain objective.

“I went into it as a reporter, not a Native American,” she said. “I interviewed both sides and told the story objectively. I couldn’t take my culture into the job.”

After leaving Seattle, Kauffman became a correspondent for ABC’s “Good Morning America” and then went to CBS, where she had an esteemed 22-year career.

She was a correspondent and substitute anchor on “CBS This Morning,” as well as a reporter for “48 Hours,” “Street Stories,” “Sunday Morning,” “CBS Special Reports,” “The Early Show,” “CBS Evening News” and CBS Radio.

Throughout her career, Kauffman volunteered for assignments other people didn’t want; she credits that for her success.

“I became the go-to gal because I was always saying yes,” she said. “It opened doors; one door leads to the next. You don’t know what saying yes at this moment will lead to down the road.”

Kauffman learned from the people she reported on, including an impoverished woman in Mexico City. On assignment for “Good Morning America,” she told the story of 30,000 people who lived at the Mexico City garbage dump.

“It was the worst poverty I could imagine and it changed my perspective on the poverty of my childhood,” Kauffman said. “I asked a woman what was the most valuable thing she owned and she said it was her family. It changed my life.”

The encounter prompted Kauffman to always have a balanced view her work and the people she interviews.

“I always attempt to treat everyone with the same type of dignity and tell their stories in the most honest way I can,” she said.

Watching Tanna Beebe, of the Cowlitz and Quinault Tribes, report the news on KIRO in Seattle inspired Kauffman as a child.

“She was a role model for me,” Kauffman said. “She showed me an American Indian woman could be on TV.”

While frequent travel meant time away from her two children, Kauffman found strength through her faith and her family.

“My son says he grew up in an editing room,” Kauffman said. “But it gave them a worldly view, a bigger picture of what America is and who we are in it. There are sacrifices and rewards in all the choices we make.”

Kauffman retired in 2012 and returned home to Seattle to write her memoir “Falling Into Place: A Memoir of Overcoming,” which was published last year.

The book is available on the websites of Amazon, Barnes & Noble, Christian Book and IndieBound.

On May 31, she was the commencement speaker at College of Menominee Nation, where she gave the graduating class of 2014 a recipe for success.

“I told them they can succeed,” Kauffman said. “It’s just showing up and doing more than is expected of you.”