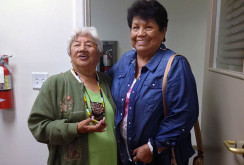 The group was also enriched by a newly found kinship with the Federated Indians of Graton Rancheria. Meeting and having a cultural exchange with members of the Graton Rancheria Tribe were highlights of the trip.

“They had to start from scratch,” Ruggy Jumper said. “It’s good to see how far they’ve come.”

During their trips, the seniors make a point of visiting other Tribes; last year they visited the Oneida Indian Nation in Syracuse, N.Y., and they will visit the Alaska Native Heritage Center in Anchorage next month. Plans for next year include attending a pow-wow in Denver.

The Graton Rancheria Tribe, a federation of Coast Miwok and Southern Pomo groups located an hour drive north of San Francisco, was removed from federal trust by the Bureau of Indian Affairs in 1958 to assist their assimilation into mainstream society. In 2000, they were reinstated when President Bill Clinton signed the Omnibus Indian Advancement Act, which restored the Tribe and all their rights and privileges, including the right to trust land.

“It’s nice to know they are federally recognized again,” Nettie Stewart said. “They started with about 14 people and now they have about 1,300 enrolled members.”

The seniors learned about the Tribe’s government, culture and casino. Members of the Tribe met with the group and showcased their arts and crafts. Mary Moore presented Graton Rancheria Tribal Council Representative Joanne Campbell with a beaded necklace in medicine colors.

“They make baskets like we do, but they make some to carry infants and to cook in,” Stewart said. “They have to gather the material for their baskets, which is getting hard to find.”

Stewart plans to send the Tribe examples of Seminole arts and crafts, including a doll, skirt and wood carving.

The California Tribe’s hilly reservation is small, with only 254 acres. Jumper said the houses sit closely together.

“Their land used to encompass the area from the Golden Gate Bridge to about 100 miles north,” Jumper said.

The Seminoles share a tradition with the Graton Rancheria Tribe; both have important annual events only for Tribal members. One calls it Green Corn Dance; the other just calls it a community gathering. Like the Seminole Tribe, the California-based Tribe struggles with passing down their culture to the next generation.

“One lady said her grandfather comes down from northern California to test her language skills,” Stewart said. “She is learning the language but none of the adults or kids speak it. She’s concerned it is dying and is trying to teach her children.”

Other memorable aspects of the trip included a visit to Muir Woods, north of San Francisco; dinner on Fisherman’s Wharf; a ferry ride across the bay to Sausalito; and tours of Alcatraz and Golden Gate Park. The rapid weather fluctuations surprised Jumper.

“The tour guide told us someone, maybe Mark Twain, said the coldest winter he ever spent was a summer in San Francisco,” Jumper said. “When we were on the ferry it was 70 degrees at Alcatraz and in the 40s by the Golden Gate Bridge.”