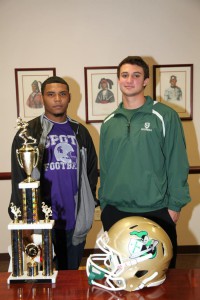 TAMPA — It was the last quarter of the last game of a tough season for the Tampa Catholic Crusaders High School football team. Tied 7-7 in a Black Friday winner-take-all playoff battle with rival Clearwater Central Catholic Marauders, the Crusaders were in a do-or-die mode. The winning team would advance to the next round of the playoffs; the loser heads home, season over.

Crusader running back Kenny Bryant sat on the bench, taking a quick breather, as his offensive teammates tried to move forward against the talented Marauder offense.

Out on the field, 5-10, 185-pound wide receiver Justin Motlow lined up near the sideline on third and long. Everyone at the packed Marauder Field watched the junior standout, who established himself this year as one of the Tampa Bay area’s best wide receivers. His year’s statistics tell the tale: 679 total receiving yards, a phenomenal 17.87 yards average per catch and seven touchdowns – all in just a 12-game season.

The pass, however, was long and wide and the offense limped back to the bench…except for Motlow.

He’s also the punter, one of the area’s most accurate. And, when the chips are down, the coaches also use the young Seminole Tribal member as a defensive back. A sure tackler with the speed to keep up with any opponent, he is the son of Clarence and Lisa Motlow.

Down the road in Riverview, Tampa Spoto High School football star Andrew Henry waited for the late-night sports news. He was anxious to hear who won the Tampa Catholic versus Clearwater Central Catholic playoff game and how his fellow Tribal member, Justin Motlow, performed. Henry’s team had finished its season two weeks earlier, crushed in the finale of a three-win season by Paul Wharton High School, 42-13.

In that game, Henry, one of the area’s best running backs, scored both Spoto Spartan touchdowns, ran for 102 yards and was named Offensive Player of the Game. Son of James and Lila Henry (and grandson of medicine man Bobby and Annie Henry), Andrew gained 866 yards on 141 carries this season, averaging 6.14 yards per carry for Spoto, which won three and lost seven in 2012.

“I was really surprised,” he said, describing a recent ceremony in which the school gave him the year’s Most Valuable Player trophy. “I knew I had the stats, but I just didn’t think I would get that award.”

The trophy means the world to Henry, a reaffirmation of a decision he made two years ago to change schools, from Tampa Catholic where he was Motlow’s teammate, to Spoto – a move that requires an athlete to sit out a year before participating in a football program. He was one of three starting players – all running backs – who quit Tampa Catholic before the 2011 season, claiming disputes with the Tampa Catholic head coach, all for the same reason.

“I wasn’t getting any playing time,” said Henry, who dominated Tampa Bay junior varsity play as a freshman. “The head coach kept making me promises he would not keep. Right after our last game in JV, he came over and said, ‘Get ready, you are going to be our star player next year. Then, he went and put me right back on (JV).”

From his view as a starter on a team predicted to compete for the state title, Motlow said he was pretty disappointed. “Andrew’s a really good football player, and I knew that would be a big loss for our team. We had three good running backs and they all left at the same time. It was devastating for us. He had a pretty good season this year, and I feel like we could have had a better season if Andrew had stayed and played with us. He brought a lot to the table,” Motlow said.

Henry also made the Tampa Bay All Star team: “I was really nervous. First day of practice you’re playing with all these guys you read about in the newspaper. When I first got there, I couldn’t believe how big they all were. All the kids were nice and friendly, though and it was easy to get comfortable.

“I was surprised I made the team. I was thinking maybe I’m really not supposed to be here. Maybe I’m not good enough, but when I actually started playing, I realized I could do it,” he said. “It sure was fun to play at Raymond James Stadium (home of the NFL Tampa Bay Buccaneers).”

Most observers said the player defections led directly to Tampa Catholic’s failure to advance in the playoffs the past two seasons. The Crusaders were eliminated in the last 2012 game, 10-7, when Clearwater Central Catholic kicked a field goal with less than a minute left. A Hail Mary pass into the end zone that bounced off three Tampa Catholic players’ hands fell to the ground uncaught as the clock ran out.

Motlow’s parents waited by the gate and embraced their son, faces streaked with tears, as he left the field, his junior football season finished.

“(Justin) was pretty upset. It hurts to lose those close ones, especially a playoff game,” said father, Clarence Motlow. “Now it’s time to put it behind him and get ready for track season. He’s a great athlete. A great kid.”

Both boys want to take their football careers to the next level. Motlow, who has one more prep year to go, has already been contacted by college recruiters.

“Oh, they know who he is. He was only a junior and the recruiters were at all his games,” said Clarence Motlow. “News of a great athlete spreads like wildfire. I expect there will be a lot of attention on him next year.”

“I’m not entirely sure where I want to go,” said the 11th-grader: “I really like FSU and USC among a couple other schools. A few schools have really reached out to me. Cincinnati came and talked to me. I am going to remain open to all possibilities. Once you get the first offer, it starts to build.”

Next year, Motlow will be touted as one of the state’s best. Opposing teams read the paper. They willingly stick double-coverage on him. Will all that attention hurt him on the playing field?

“It makes me feel pretty good, actually,” he said. “When you know the defense is coming after you, you have an advantage. You know what’s coming, and you are ready to deal with it. That kind of attention makes you play all that harder. So when you do beat them, it’s a great feeling.”

Henry has had less attention from college scouts. He’s a few inches shorter than Motlow, which can greatly influence a scout “until he actually comes out and sees me and watches what I can do,” said Henry, who is confident he will be a college football player. “Even if I have to walk on and prove myself that way.

“I want something in Florida. I’ll go to any school in Florida that will offer me a scholarship. I would prefer not to go to a big school like Florida or FSU. I really want to play for a smaller school.”

As Seminole Tribal members, both boys’ educational and financial futures are secure. Neither boy, however, wants to settle for that: “I would tell all the Tribal youth to go out and make something of yourself. Learn how to make it on your own,” Henry said. “I don’t want to rely on (Tribal money). I don’t expect for that to be there forever. I want to make sure I make my own money and not rely on just the Tribe. I don’t want something to just be handed to me.”

Though they went to separate schools this year, Motlow said he and Henry have to deal with the same issues: “The kids never gave me a real hard time. It was always jokes. They think they know what it is to be Seminole, but a lot really don’t. We don’t pay taxes. That’s a common misconception, but I don’t know where these kids get some of these ideas. One of the weirdest things people say to me, all the time: ‘You get to gamble free at the casino!’”

Henry laughed and shook his head in agreement, as Motlow continued: “I tell them: ‘Playing the casino for free? That’s not gambling!’”

Being Seminole is important to both boys, who come from strong, Florida pioneer families. “Just because you are getting money from the Tribe and will likely be financially stable, well, don’t rely on that. I don’t even think about it. You have to realize everything in life will not be handed to you,” Motlow said. “You still have to go out and try your best at everything you do. Don’t be lazy and don’t expect everything will be handed to you.

“It makes me feel strong. We are very fortunate. It’s only right that we use what we get from the Tribe, and what we work for on our own, to better ourselves and the Tribe and the world we live in.”