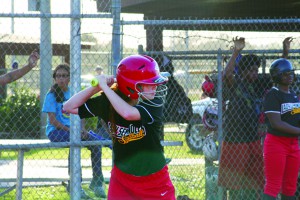 BRIGHTON — Spring is in the air, and so begins the time for softball and baseball players to dust of their gear and prepare for the new season.

Pemayetv Emahakv Charter School girls’ softball and boys’ baseball teams kicked off their seasons on Feb. 22 with a schoolwide pep rally to get them excited for that evening’s home games against the Everglades City Gators.

At the pep rally an exciting introduction of each player was given by PECS athletic director and girls’ softball coach Darryl Allen. Both teams left the rally feeling overwhelming support and encouragement from their friends, coaches, teachers and family.

In his dual role, Allen looks forward to a strong and productive season by both the boys’ and girls’ teams.

“I look forward to watching them compete at a high level, week in and week out,” he said. “[I enjoy] watching these student athletes grow and have success on the field and in the classroom.”

The Lady Seminoles took the field as the first pitch was thrown at 5 p.m. by pitcher Diamond Shore. Diamond started the game strong, whirling strike after strike at the Lady Gators.

The Lady Seminoles took the saying “three up, three down” to heart, and within a few minutes were in the dugout gearing up to bat. They quickly racked up seven runs by the top of the second inning and held a strong lead over the Lady Gators throughout the game.

Their efforts as a team ended the evening with a 17-1 win. This year the Lady Seminoles are led by Allen and assistant coaches Kelley Smiley, Naha Jumper and Erena Billie.

The PECS boys’ baseball team jumped ahead from the very first inning against the Everglades City Gators. Sean Osceola found the strike zone with his first pitch and left the Gators struggling to get a base hit for the remainder of the evening.

On the occasion a ball was hit by an opposing Gator, the strong fielding by the PECS boys shut down any chance of it becoming a base hit. The PECS boys led the score all evening and were ahead 5-0 by the top of the fifth. A triple by Osceola at the bottom of the sixth gave PECS a 7-0 lead.

The Gators were finally able to squeak by with a run in the bottom of the sixth. The PECS boys proved to be a tough team to beat as they ended the evening with a 7-1 win against the Gators. The PECS baseball team is led this year by head coach Harry Tewksbury and assistant coaches Gene Thomas and Kevin Jackson.

Allen hopes the players leave with an understanding of hard work, commitment, dedication, structure and discipline.

“They can move mountains in their young teenage life that will carry them in to adulthood as well,” he said.