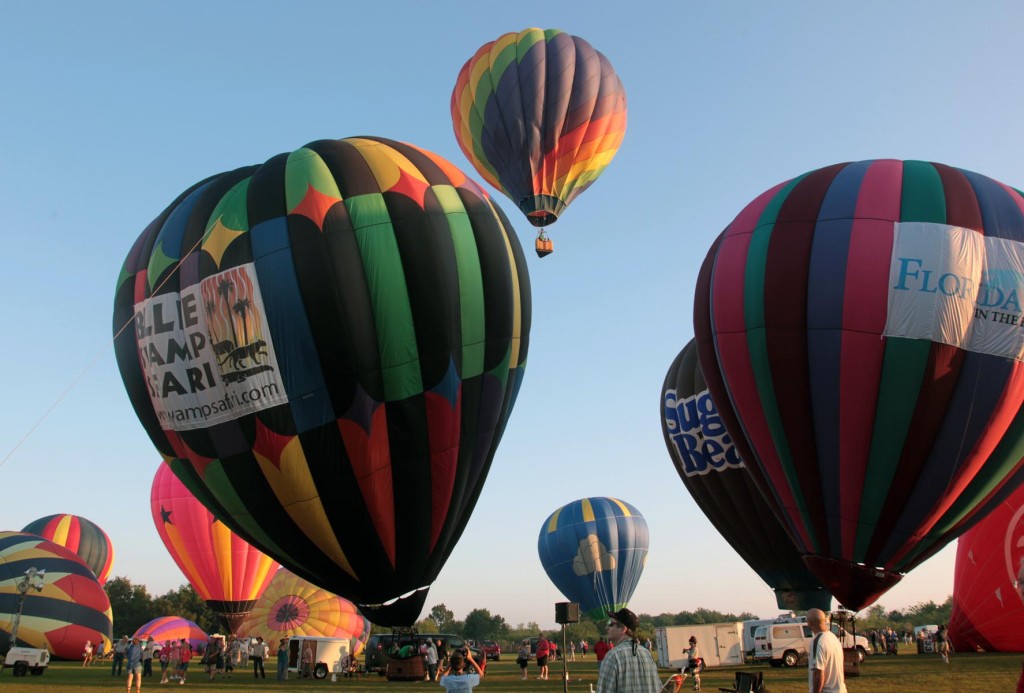 IMMOKALEE — Crowds gazed at the beauty of 30 hot-air balloons floating away together during an early morning breeze in Immokalee last month.

The sight was a highlight of the third annual Balloons Over Paradise festival sponsored by Seminole Casino Immokalee April 26-27. About 35,000 people attended the event. Thirty additional balloons remained inflated on the ground so people could see them close-up, talk to pilots and take tethered rides.

Balloonists from as far as Ohio and Kentucky competed in a Hare and Hound race from Seminole Tribe Youth Ranch Immokalee to nearby Ave Maria University. The first balloon to take flight was the designated hare, which dropped a 50-foot, X-shaped target on the ground. The job of the hound pilots was to throw a marker on the target; whoever came closest to the center won. It took about an hour for the balloons to reach the site 7 miles away.

“The event started as a way for the casino to get more involved in the community,” said Jim Gibson, director of marketing for the casino. “But it also drives tourism to the region; anything we can do to bolster the economy reaps benefits for the casino itself.”

The event also showcased Seminole culture and heritage. Alligator wrestling, archery demonstrations, traditional cooking on the open fire in the chickee and plenty of arts and crafts for sale drew tourists to the cultural village.

The day before the public event, about 500 students from Naples, Fort Myers and Immokalee toured the grounds and learned about ballooning, aviation and flight.

Another highlight of the festival was a polo match. The balloon field was transformed into an arena-sized polo field – 110-by-55 yards – for the game.

A traditional match is between teams of four players; the demonstration game pitted two teams of three against each other. The players included two Americans, two Swiss and two Argentines, and they brought 30 steeds on which to play. Polo ponies are thoroughbred horses of American and Argentinian lineage. After each 7.5-minute chukker, or period, players replaced tired horses with fresh ones.

“It’s exciting because you feel the horses right on you,” said Kris Kampsen, of Wellington, player and organizer of the match. “It’s not like croquet.”

Tito Gaudenzi grew up playing polo; his father was also a professional player.

“I like the interaction with the horse; you become one with the horse,” said Gaudenzi, of Switzerland, who organizes polo events around the world with Kampsen.

The roar of hooves combined with the shouts of players made for an exciting match. During halftime, spectators were invited onto the field for the traditional stomping of the divots, or mounds of earth torn up by hooves. Music played and people danced, pranced and stomped divots flat.

After the match, music by Rachel/Hughes Band, JJ McCoy Band and headliner Sister Hazel kept the crowd moving and grooving. As the sun sank in the sky, the glow of tethered balloons illuminated by propane filled the field.