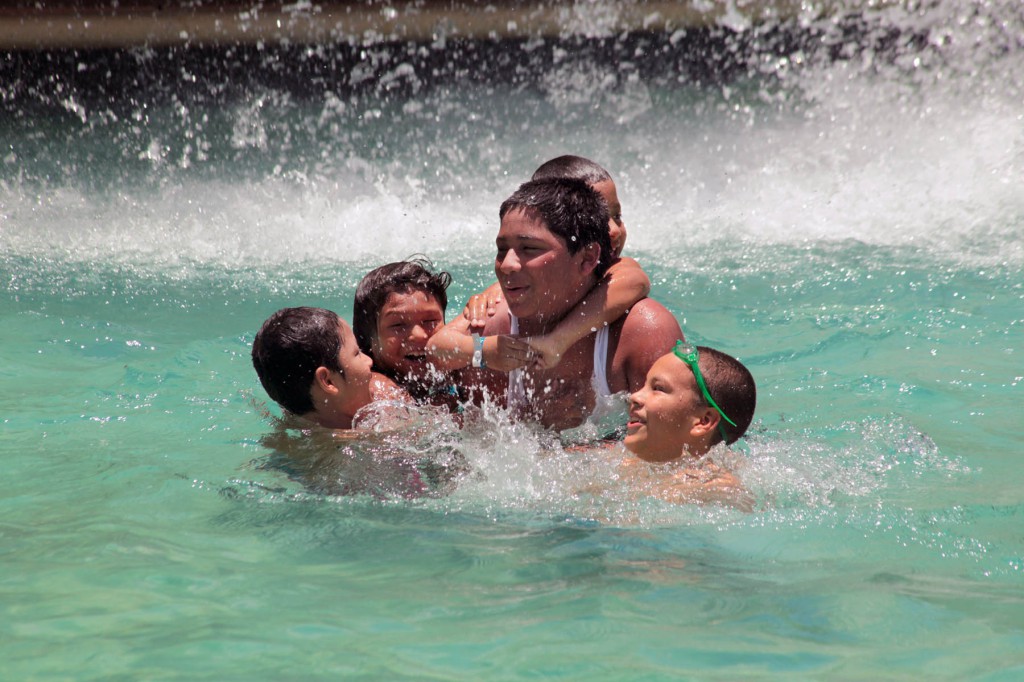 Summertime may be break time for students, but it is also a time to celebrate the year’s hard work with fun activities and awards. The Education Department held several incentive award ceremonies to honor students of all academic levels for their achievements this year.

For Hollywood and Fort Pierce students, the Hard Rock Hotel & Casino Hollywood’s pool deck was turned into a carnival on June 24, complete with cotton candy, games of skill and a DJ spinning the latest hits.

“It’s always good for us to reward the kids who make it through the school year,” said Hollywood Board Rep. M. Steve Osceola. “It shows them when you do the work, there is a payoff at the end.”

Councilman Chris Osceola saw the future at the party.

“You guys are the future of the Seminole Tribe of Florida and the more education you get, the better served you will be in life,” he said. “I want to thank the parents for getting these kids off to school every day and the Tribe for providing the resources for them to achieve their goals.”

Rep. Osceola was frank in his remarks to the students.

“I don’t want to hear about a GED,” he said. “After all the work you put in, finish high school. I want to see diplomas and kids going on to higher education.”

Councilman Osceola struck a similar chord with his remarks.

“We can’t emphasize enough that kids need to stay in school,” he said. “The Tribe invests in our kids; we spend a lot to put the kids through school. To me it’s a tragedy to drop out. Parents need to educate the kids as to how the world operates outside of the Tribe. A lot of kids can’t afford this; we should take advantage of it instead of taking it for granted.”

Trail families gathered on June 17 for an evening of awards, accolades and a fine meal at the Texas de Brazil restaurant on Miami Beach. Two students graduated high school – Darian Cypress-Osceola and Elena Jim – and two others earned students of the year at the Miccosukee Indian School – Kailani Osceola and Julian Osceola.

“We want the kids to see what their hard work got them for the year,” Trail Liaison Norman Huggins said. “And we haven’t had two graduating seniors in a long time.”

Education Department staff recognized each student with a certificate of achievement, which were handed out to hearty applause.

“The students have had a great success and it’s time to celebrate them,” said Preston Steele, director of Education. “We want them to relax and have fun over the summer; it’s really a time the kids need. That’s the assignment I’d like to give them.”

Steele had a few important points to make to the students and their families.

“Education isn’t a journey in life; it is life itself,” he said. “An educated mind is a free mind.”

Naples youth were recognized for their educational effort and achievements during an incentive awards presentation at the Bowland Woodside activity center on July 8. The children and their parents participated in an afternoon of bowling, pool competition and arcade games following the awards ceremony.

“Incentive awards show our kids that through hard work, determination and initiative they can obtain their goals,” said Naples Liaison Brian Zepeda. “This is a life lesson that they will carry with them as they strive for new heights.”

Naples is a small community but its academic achievements are large. School attendance records were outstanding and the students received an abundance of awards and certificates.

Both Kaitlin Billy and Bryce Osceola graduated high school this year with high grade point averages and honors. Their plans for the future include higher education goals.

Distributing certificates, medals, ribbons, backpacks and incentives, Education adviser Victoria Soto said, “Education is its own reward. It opens doors of opportunity and helps turn life into an extraordinary adventure with unlimited possibilities.”

The incentive awards were just one of the many benefits for the children of the Naples community.

Parents showed overwhelming support throughout the year and were complimentary of their children’s achievements. Their joint efforts build strong families and create bright futures.

“My kids transferred from public school to the First Baptist Academy this past year and the results have been awesome,” Tammy Billie said. “Their enthusiasm, study habits and grades have grown to new heights. It appeared in the past that they were always flying below the radar and the system didn’t seem to care. Now they are excelling academically and their confidence levels are soaring.”

In Tampa, Council Liaison Richard Henry honored seven adults, 44 youngsters and 13 Police Explorers on July 9 with gifts and an Italian buffet at the Spaghetti Warehouse in Ybor City.

“Nothing’s more important than education,” he said. “They may not know it now, but they will surely realize it someday in the future.”

Among the adults, Annie Henry won the Most Improved Attendance Award; Peggy Cubis was declared Most Determined to Improve; Nancy Frank was chosen Most Dedicated Reader; Maggie Garcia won Most Improved Reader; and Linda Henry was handed a certificate for Most Improved in Vocabulary. Miranda Motlow was honored for her graduation from the Connecticut School of Broadcasting.

Trystyn Storm was credited for achieving her GED and Andrew Henry was singled out for his 3.06 GPA as the only Tampa high school graduate of 2013.

Among the children Lauren Smith led first graders with a 3.4 GPA; Jesseca Jimmie led second graders with the only Three Days or Less Absent Award; Azaria Simmons topped third-graders with a 3.69 GPA and a Three Days or Less Absent certificate; Desmond Miller’s 3.98 GPA led all fourth-graders; William Cypress (3.08) was the top fifth-grade student; Victoria Smith’s 3.91 GPA topped all sixth-graders; likewise, Carissa Colon (3.07) topped the seventh grade; honors student Mason Foret finished above all eighth-graders with a 3.79 GPA; Christina Clark led the ninth grade with a 3.84 GPA; Ricky Dillon was the standard bearer among 10th-graders with a 3.45 GPA; and top athlete Justin Motlow (football and track) also outdistanced his  11th grade classmates in the classroom with a 3.68 GPA.

Peter B. Gallagher and Judy Weeks contributed to this article.