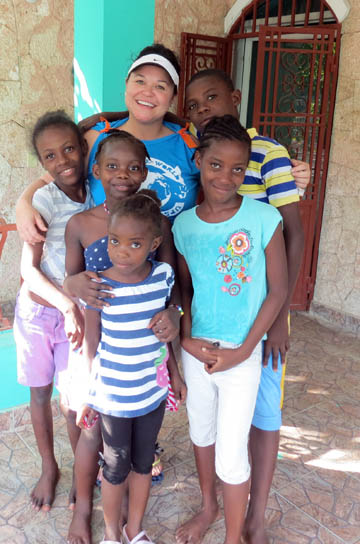 JEREMIE, Haiti — Emma Johns traveled to the Caribbean during spring break, but the trip was far from a relaxing beach vacation. She and eight other members of Okeechobee’s More 2 Life Ministries spent March 14-21 in Haiti on a mission to help orphans and residents in the impoverished town of Jeremie.

“There is no medical treatment in Jeremie, no government and no hope for change,” said Johns, dean of students at Pemayetv Emahakv Charter School. “That’s why the ministry is there; there’s a need for it.”

Johns and the group filled the orphanage’s larder with food, clothing, school supplies, soccer balls and tools. They brought toiletries, coloring books, crayons and a month’s supply of rice and beans.

Most of the items were donated by the First Indian Baptist Church of Brighton.

Jeremie, an isolated coastal town of about 31,000 people, is about a 10-hour bus ride from Port-au-Prince. There are only several flights each week from the capital to the town’s gravel airstrip. Roads are unpaved, unmaintained and contain large potholes. Electricity is undependable and mail systems are non-existent.

There is a high birthrate in the area because of a lack of birth control. Abandoned babies are sometimes found in dumpsters.

Lumpkin has lived in Haiti on and off for five years and attended Youth With A Mission Discipleship Training School to prepare him for his role at the ministry. He said he was pleased to see the church group touch lives in Jeremie.

In his experience, he doesn’t know many Haitian mothers who show affection toward their children.

“Their hearts are very calloused to the hard way of life here. I loved having people here who can love on these children as our mothers loved on us,” Lumpkin said via Facebook chat.

The nameless orphanage’s staff of five attends to 52 children, including three who are disabled. Lumpkin said parents are ashamed of their special needs kids, so they leave them at the orphanage. Other children are dropped off by parents who continue to have more kids but can’t afford to feed them.

“Haitian men can have up to four to eight wives with a small tribe of children. I know men who have 22 children and don’t make five dollars a day,” Lumpkin said. “Eighty-five percent of the children in Haiti do not have fathers. It breaks my heart and I thought I would get used to it, but I haven’t reached that point yet.”

From infants to late teens, each child was photographed by the church group with the intent of finding them sponsors to help sustain the facility, which has no showers and one unreliable toilet.

“Casey is a direct link to the church,” Johns said. “We know where the money will go and how it will be spent.”

Johns said there is more to be done.

“None of us wanted to leave,” she said. “I can see myself going back in the future for longer periods of time.”

The mission group also visited the small fishing village of Bonbon, about 25 minutes west of Jeremie, where many residents suffer from alcoholism. Lumpkin maintains a fishing ministry in Bonbon called Gideon Men.

Lumpkin meets with 35 to 50 men every week to hold Bible study and host fishing trips.

“Mainly [I am] sharing God’s truth on how to be Godly husbands and fathers,” Lumpkin said.

During the week, the group also hosted a movie night at the mission and prepared about 250 peanut butter and jelly sandwiches for children and women in the tent cities that line the roads.

“Seeing how big a difference you can make changes your perception,” Johns said. “With something so small like peanut butter and jelly sandwiches, who ever thought someone would hug you for something like that?”

Mendez said the highlight of her third mission trip to Haiti was spending time with the children at the orphanage and in the community.

“We held them, loved on them, sang with them and prayed over them,” she said in an email. “Most children do not get much attention from adults. They are hungry for affection and attention. I love sharing with them how much Jesus loves them and how they have many people in the states praying for them. I believe in investing in the children. They are Haiti’s hope.”

Johns said she has always felt compelled to help others and now wants to do something greater with her life. She said that while survival is the main goal for children at the orphanage, they are desperate for love.

“God’s love doesn’t stop at the U.S. boundary; the need is worldwide,” Johns said. “The trip changed me. I see the need and realize there are things we can do. Understanding you can make a difference to those people every day is life changing. I’d go back tomorrow and stay; that’s how life changing it was.”