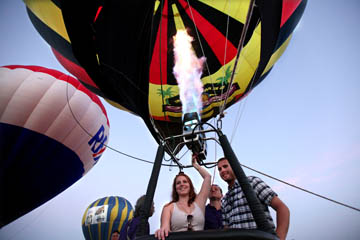 IMMOKALEE — Kelsey Cooper and Doug Allen climbed inside a wicker basket April 12 and peered deep into a massive balloon that towered above propane-driven flames that fueled the most basic air-flight machine.

“I probably won’t ever get to do this again in my entire life,” Allen said before the Immokalee Casino hot-air balloon lifted toward the sky to start the Seminole Casino Hotel Immokalee’s fourth annual Balloons Over Paradise Festival race.

“We’ve been embraced by the ballooning community,” said Jim Gibson, the director of marketing at Seminole Casino Hotel Immokalee.

Gibson, who established the event in 2010, said the proof is in the turnout. Twenty-five balloon pilots signed up to participate the first year. Now, the event – staged primarily to promote the Immokalee casino and its new 99-room hotel and entertainment complex – is one of the largest in the nation, he said.

Spectators formed constant lines just outside the balloon field for shuttle rides to see the casino and hotel for themselves.

In the beginning, balloonists mostly from the southern United States participated. This year, balloonists hailed from Maine, Colorado, Idaho and even Albuquerque, New Mexico, which is considered the hot-air ballooning capital of the world.

Sheryl Jimson, a new resident of Florida’s west coast via Albuquerque, said the festival made her feel at home – albeit with about 700 less balloons.

“When I walked through the field with hot-air balloons all around me, I felt lucky to be here and a little more like home. That feeling is always amazing to me,” Jimson said.

The hare and hound race worked like this: The Immokalee Casino balloon (the hare) took off first, catching the breeze to somewhere near Ave Maria where balloon captain Charlie Edwards dropped a 50-foot-wide X into an open field. The other balloons (the hounds) followed the hare in search of the X and if they found it, they dropped a weighted marker as close to the X as possible.

The closest marker won the first prize, the second closest won the second prize and so on.

Bob Carlton, the event’s lead balloon organizer and the commercial pilot of the Immokalee Casino balloon, said weather and wind dictate whether races actually occur. Visibility must be at least 3 miles out and winds can be no more than 7 knots, or nearly 8 miles per hour.

In the case of the first April 12 race, an unexpected fog that rolled in over the marshland caused the race to be called short but not before the first cash prize winners made it to the destination.

Carlton, a ballooner since 1976, said he takes the Immokalee Casino balloon to about 20 events per year. His favorite ballooning tradition is plucked from ballooning history that dates to the 18th century – the sharing of champagne at the journey’s end.

“Land owners have to be supportive if you expect to land in peace – no one likes a trespasser. It’s tradition to bring a bottle of champagne to celebrate with the landowners. It was considered the kings good spirit,” Carlton said.

Fun was had also by hundreds of festival attendees who mounted baskets on tethered balloons that lifted only 20 feet from the ground and never left the festival field.

“It was awesome, very beautiful. The stillness, the quiet, the view – it was all so nice,” said Cris Brown, of Naples, after her first, though tethered, balloon ride.

“It absolutely capped another fun day in paradise,” said her husband, George Brown.