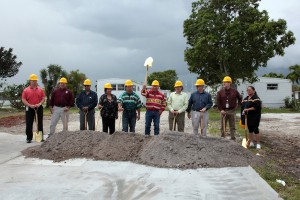 HOLLYWOOD — With an eye toward the future, the Seminole Tribe held a ceremonial groundbreaking and open house for the proposed new home of the Hollywood Recreation Department on April 30 in Seminole Estates.

Part of the Hollywood Reservation and connected by a tunnel under the Florida Turnpike, the 21-acre site will boast a recreation center with two basketball courts and fitness center, Boys & Girls Club, community center, pool and three ball fields. The site plan is still being finalized, but the construction period is estimated to take two to three years.

“This is a big step forward for the Tribe. We’ve been talking about a new recreation facility for 15 years,” Hollywood Councilman Marcellus W. Osceola Jr. said. “I think it’s a great accomplishment and will have a positive impact on the Tribe.”

The Tribe will take back Seminole Estates, a 93-acre site, on July 1. The recreation center is the first phase of the site, which will ultimately include houses, townhomes, a new water treatment plant and possibly commercial development. The existing Hollywood Gym, pool, Boys & Girls Club, fitness trailer and ball fields will become home sites and a neighborhood park. The senior center, Dorothy S. Osceola Building and parking lot will remain as is.

The event began with Paul Buster and members of the Seminole Baptist Church singing songs in Mikasuki, or Elapoonke, followed by the Pledge of Allegiance by Hollywood preschool students. Curious community members also came out to see the site plans.

The recreation center and the Boys & Girls Club buildings will be 42,000 and 20,000 square feet respectively designed by architecture firm Leo A. Daly in West Palm Beach, which also designed the Chupco Landing Community Center in Fort Pierce.

“Seeing the smiling children put this project in perspective; it is for those kids and future generations,” said Ronald K. Wiendl, architect and director of design at Leo A. Daly. “It’s a campus, but we wanted it to look like a park in a natural setting. We took cultural symbols and integrated them into the design; it’s respectful of the past but looks toward the future.”