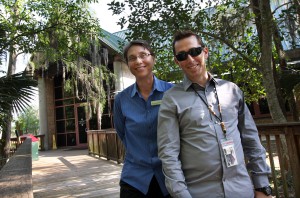 Longtime colleagues Paul Backhouse, who was appointed director in February, and Annette Snapp, hired as operations manager in April, have worldwide experience in archaeology and share an appreciation for cultural preservation.

“That’s what took me to Asia, Indonesia, Australia and Fiji and eventually to the United States,” said Backhouse, a native of the Isle of Wight in the English Channel. Backhouse has a doctorate in archaeology from Bournemouth University in England.

Snapp, born in Illinois and also an archeologist, earned a doctorate in museum ethnography (the study of people through observations, interviews and artifacts) at Oxford University in England.

Both landed positions with the Seminole Tribe after years researching other Native American Tribes.

Backhouse, a former field archeologist for the Museum of Texas Tech University’s Anthropology Department, helped document the Comanche Indians by unearthing finds from places the Tribe lived long ago. He was hired as a chief data analyst for Ah-Tah-Thi-Ki in 2007.

“I saw an opportunity to interact more closely to an entire people,” he said. “To be this close to the material in a museum and to the actual people living here is great.”

But unlike museums that complete for the most revealing and provocative exhibits, Ah-Tah-Thi-Ki must also protect and preserve Seminole culture – because it’s very much alive.

Backhouse, also an officer with the Tribal Historic Preservation Office (THPO), spends much of his time surveying nearly 3,000 sites per year throughout Florida for potential Native American historical significance. It’s the law.

The National Historic Preservation Act (1966), the Florida Historical Resources Act (1967) and the Cemetery Act (1990) ensure that before land is developed anywhere for any reason, an archaeological survey must be produced for review by the Division of Historical Resources. In most instances, THPO does the job.

Backhouse also sits in on Everglades restoration and construction meetings with the U.S. Army Corp of Engineers.

“We have to be there to be sure that the Tribe’s voice is heard,” Backhouse said. Hundreds of locations on Seminole reservations are already designated as historically sensitive for reasons such as burial sites, medicinal plant locations or ceremonial areas. A mammoth tooth from 10,000 years ago was found in a local canal. Unearthed pottery pieces date back 1,000 years.

Snapp said she “jumped at the chance” to work for the Tribe after years behind the scenes at several museums in England, then helping discover a Catawba village in Rock Hill, S.C. Her specialty is collecting, preserving and studying materials that tell the story of people.

“People love to see things at the museum, but they don’t know what goes on behind the scenes to preserve everything,” she said.

Both taught at Florida Gulf Coast University where they participated in two field studies on the Big Cypress Reservation in search of Fort Shackelford, which is believed to have stood on Moses Jumper Jr.’s pasture.

Backhouse said their mission is twofold at Ah-Tah-Thi-Ki.

They will continue building on the integrity of the Museum, a passion established by Chairman James E. Billie when he opened Ah-Tah-Thi-Ki in 1997. In 2009, it became the first Native American museum to achieve accreditation.

“We blazed the trail for all the others,” Backhouse said.

And they will advance with ideas for exhibits and community happenings to attract visitors and more participation from Tribal members.

Already, the Mosaic Gallery near the entrance of the Museum showcases work by Seminole artists. Outreach programs that travel reservation to reservation include Seminole Moments, Seminole Storytelling and day-long canoe journeys through the Everglades.

Future traveling exhibits will include “Ramp It Up,” a showcase of Native American culture and skateboarding, which was originally shown at the Smithsonian’s National Museum of the American Indian, and a show produced in-house featuring music though Seminole history from spiritual chanting to the hard rock sounds of the Osceola Brothers.

Another idea for the future: the construction of a cultural center for Tribal members. The facility will stand separate from the main buildings for private viewings of historic materials and Tribal-only cultural events.

“We have 100,000 photographs and artifacts from the past and a lot of (Tribal members) who want to come in and look through them,” Backhouse said. “No one else can see them, but Tribal families should have a place to access them and contemplate them.”