The Lady Warriors won their first-ever softball game on Feb. 13, a 21-20 win over St. John Neumann Catholic High School in the home opener. In addition, they defeated two opponents, Glades Day School and Immokalee High School, twice in a season – a first for the fledgling program.

To top it off, the Lady Warriors traveled to the Brighton Reservation for the first time on April 3 to play against Pemayetv Emahakv Charter School, which ended in a 19-8 loss for the Lady Warriors.

On the boys’ side, the Warriors played their first-ever baseball game on the road against Moore Haven High School on March 9 – an 11-4 loss for the team.

The Warriors played all their games played on the road, including a 4-3 loss to Marco Island Academy on March 27.

The Warriors also traveled to Brighton on April 3 to face off against the Charter School – an 18-0 loss in five innings.

There were ups and downs with both teams, but through it all, the players and coaches gained experience and learned what it’s like to grind it out on the field as a team. 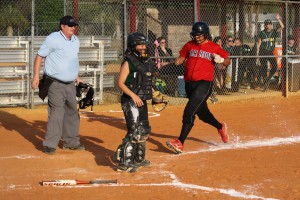 “We still have a lot of hard work ahead of us,” he said. “But overall, I think they’re getting comfortable enough to try some of the plays in games that they’re taught in practice. I see that they trust each other more.”

The trust paid off, as the Lady Warriors started their season off with a 3-0 record thanks to wins over St. John Neumann, Immokalee and Glades Day.

The Lady Warriors’ first loss of the season came against Palm Beach Central High School on Feb. 24, but the Big Cypress-based junior varsity team rebounded in their next contest, completing a season sweep of Glades Day in a Feb. 28 road game.

A second loss to Palm Beach Central on the road left the team’s record at 4-2 , but during their next game on March 22, they scored their third consecutive home win of the season – a second victory over St. John Neumann.

A four-game losing streak followed, with road losses to St. John Neumann, LaBelle High School and the Charter School, as well as their first home loss of the season against Lake Placid High School, dropping the Lady Warriors’ record to 5-6.

“We made a lot of mental mistakes in those games,” Gallegos said.

The April 3 loss against the Charter School had its ups and downs for the Lady Warriors.

The Lady Warriors used the loss as motivation to finish the season on a high note.

They won their home finale on April 10 against Immokalee – a 16-12 win that gave the Lady Warriors a season sweep of Immokalee and tied their record to 6-6.

The Lady Warriors finished their season with a 13-10 loss to Lake Placid on April 12 and a win by forfeit against St. John Neumann on April 13, bringing their final record to 7-7.

“I think we have a good team,” Gallegos said. “I believe the girls have their best softball ahead of them. They have come a long way.”

During the offseason, Gallegos said he’s thinking about giving the girls the opportunity to attend a softball camp to further improve their skills.

Beginning next season, the Lady Warriors are expected to join a district, which means they can qualify for the postseason in 2013.

“We have just begun our story here at Ahfachkee,” Gallegos said. “It looks promising in the future for our girls.” 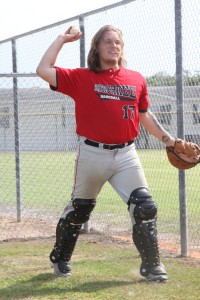 Although the Warriors ended their season with a 0-5 final record, head coach Randall Cleckler did his best to keep the team’s first season in perspective.

“Our players are learning the game as with any first-year program,” Cleckler said. “Game play strategies, positioning, defensive and offensive mechanics are still new to some of our players, and they work in practice to improve.”

In the 4-3 loss to Marco Island, Cleckler said his players put their practice to good use on both offense and defense. Capitalizing on a few of Marco Island’s errors made for a close game.

“We were successful on defense against Marco Island the first time out,” Cleckler said. “We want to be more aggressive on both sides of the ball the next time we play them.”

Regardless of how the season turned out, he said he sees a bright future for the Warriors.

“I think the baseball program can grow,” Cleckler said. “I would like to thank the Big Cypress community and the players’ parents for their support and for investing their time to encourage their kids in playing this sport.”