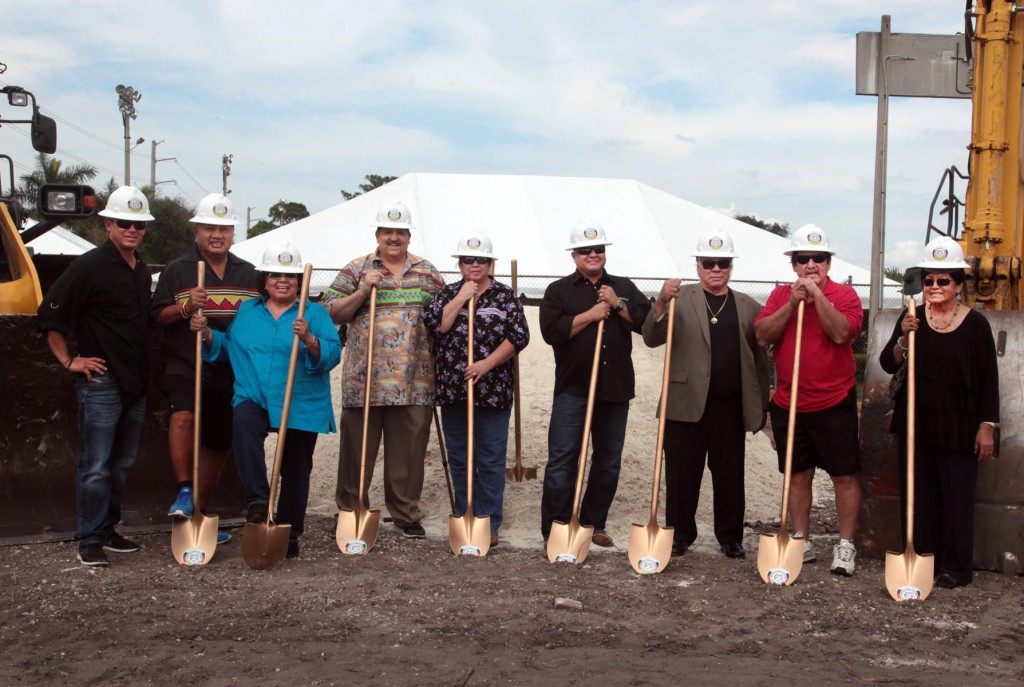 HOLLYWOOD — With construction to commence soon on the Howard Tiger Recreation Center in Hollywood, the community broke ground on the site Jan. 14 and paid tribute to the man for whom the building will be named.

Considered the father of the Tribe’s modern-day athletic tradition, Howard Tiger was known for his leadership, athleticism and coaching skills.

“He knew athletics teaches a lot: teamwork, discipline and things you can use later in life,” Max Osceola Jr. said. “This was our field of dreams. Howard would be proud if he was here today.”

Hollywood Councilman Chris Osceola spearheaded the effort to build the new facility on the reservation, and although too young to have known Tiger personally, Councilman Osceola knows he’s one of the beneficiaries of Tiger’s dedication.

“Even though I didn’t spend time with this great man, those who did passed it down to my generation,” he said. “I look up to men like Moses (Jumper), Max (Osceola Jr.) and Mike (Tiger) and learned from them, who learned from Howard. It’s fitting that we put his name on this building.”

The 39,000-square-foot, two-story facility will house the gym, Boys & Girls Club, and the Fitness and Culture Departments and will feature two basketball courts, cardio and weight rooms, classrooms and catering kitchen, among other amenities.

“Through athletics and sports, he helped raise another generation of leaders,” said Moses Jumper, master of ceremonies of the groundbreaking event. “Sports are why I’m here; I wasn’t that great of a student and without sports, I probably wouldn’t have stayed in school.”

Although Tiger’s life was cut short in an accident, his legacy lives on through the athletes he coached and the lessons he taught.

“Before there were iPhones and iPads, there was I play,” said Max Osceola Jr. “It got us together and we were friends because we played, won and lost together.”

Tribal leaders shared stories about the impact Tiger had on their lives. Chairman James E. Billie said he was a “manly man” who devoted his time to Tribal youth, while Brighton Councilman Andrew J. Bowers Jr., who played softball at Haskell Indian Nations University, recalled that Tiger did whatever necessary to make people around him do their best.

“He was a person who did the right thing,” Councilman Bowers said. “When a person does that, people look at that and want to be just like him.”

Michael Tiger also shared memories of his father’s toughness and love. His years as a Marine included fighting in the battle of Iwo Jima, one of the bloodiest of World War II.

“He was tough,” Tiger said. “He coached us the same way; if you didn’t catch the ball, there’d be another one coming at you even harder.”

Priscilla Sayen and Judybill Osceola, members of the Tribe’s first female softball team, had fond memories of their team and coach. Osceola said they never lost a game.

“We may be old ladies now, but I bet we can still play,” she said. “Under Howard Tiger we were the best.”

“He was a leader among leaders,” Sayen added. “He heard the calling from his people, and we are a product of that leadership. He was as tough with us as he was with the boys.”

Councilman Osceola, who grew up as a “gym rat” in Hollywood, said the new facility will continue Tiger’s legacy for Tribal kids.

“Going to the gym has had a great impact on my life,” said Nicholas DiCarlo, Tiger’s great-grandson. “I never want to miss an opportunity to hear about my elders; I didn’t know he was such a leader. Hearing everything people said was eye opening for me. I really wish I got to meet him and that we all had the dedication my great-grandpa had.”

The facility will be built adjacent to the existing Hollywood Ball Field. The anticipated completion is slated for December.

“This is a big occasion,” said Hollywood Board Rep. Steve Osceola, who acknowledged the work of the Board, Council, Seminole Stiles and the Construction Management Department. “It shows when we work as a team, we can get things done. The machines are ready to go to work out there.”