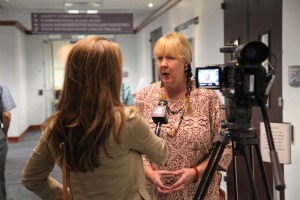 NAPLES — The three-year fight between historic Ted Smallwood’s Store and land development company Florida-Georgia Grove LLP (FGG) may be heading back to court.

The refusal of the commission to allow FGG to remove the public right-of-way puts a cramp in FGG plans to develop the property, likely forcing the two warring parties back into a 12th Judicial Circuit Court trial.

A room full of Chokoloskee residents and mostly Mamie Street supporters cheered the vote, which came after a two-hour hearing. Photographer Clyde Butcher led off the public portion of the hearing by warning county commissioners to, “Keep an eye on (FGG). I just don’t trust ’em. People who would block up the road like they did are not good people.”

Butcher referred to the April 14, 2011 sunrise takeover of the road by FGG that shocked residents. Gary McMillin, whose wife, Lynn, is the granddaughter of store founder and Collier County pioneer Ted Smallwood, gave commissioners a graphic account of that morning.

“The cops were poking me with the baton. They blocked and tore out a county road and the police were going to lock me up,” he said, winding up his three-minute harangue by roaring that the FGG offer to build a new access to the store was unacceptable.

The offer, contained in an official settlement agreement that Lynn McMillin signed, included building a new road on the eastern edge of the FGG property, contingent, of course, on the county vacating the road.

“There are mangroves over there where they want to put another road. What assurances do we have that they won’t renege on their word? Or that the Army Corps of Engineers will even allow them to do it?” asked Florida folksinger Valerie Wisecracker, who said she would gather Florida musicians to perform in concert for the store to raise money for legal fees. “I’ve never seen anything so blatant. Such injustice.”

Lynn McMillin, who had originally signed the settlement, had second thoughts talking to the many well wishers who gathered in the commission chamber hallways before the hearing.

“I just wanted to get this behind me,” she said. “We owe $120,000 in legal fees already. I don’t want to give up, but I don’t know how long we can last. They have all the money in the world and we don’t have anything. A trial? More money, more legal fees.”

McMillin broke out in tears, telling commissioners: “I hope you see this is more than just a road. I hope you decide to preserve a piece of the county’s history, the Smallwood Store.”

After the hearing, Lakeland attorney Jim Kelly, the FGG managing partner, expressed dismay that the road vacation and the settlement agreement had failed: “What do they want us to do? We were going to build them a road. They would have had proper access. I sincerely felt this was a fair settlement.”

Kelly does not look forward to a return to the 12th Circuit Court, which had found FGG in contempt and ordered the group to put back Mamie Street, after they had bulldozed it in 2011. “At this point I really don’t know which way to go. I don’t know what is going to happen,” he said.

Kelly and FGG obtained the property in early 2004 from the Seminole Tribe of Florida. It was originally purchased to build a park that would protect the still working old fishing village from development. The property held the small Blue Heron Motel, which the Tribe had planned to renovate and reopen for business; FGG tore the building down after purchasing the property.

The Smallwood Store played an important role in Seminole Indian history, as one of the few places trusted by Indians living in the Everglades to trade for supplies early in the 20th century. Shopkeeper Smallwood gave the Indians credit and protection, allowing them to park their canoes and camp out, undisturbed, on his property. The store is also known as the place where a murderous farmer was gunned down by a posse of town folk, immortalized in the book by author Peter Matthiessen, Killing Mr. Watson.