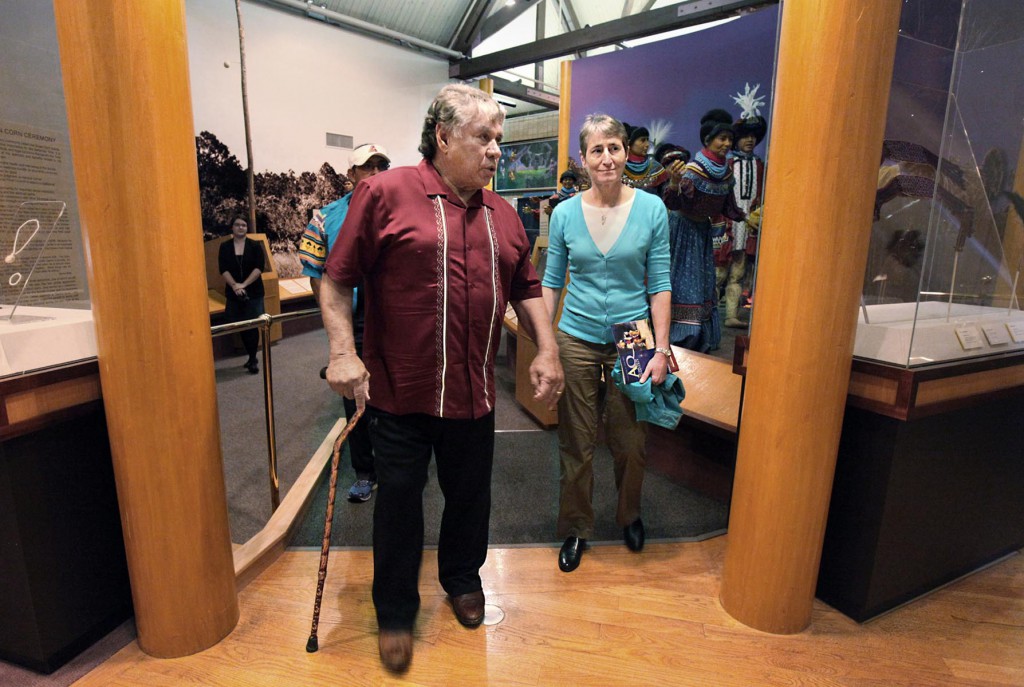 BIG CYPRESS — U.S. Secretary of the Interior Sally Jewell received more than a VIP tour on a recent visit to the Big Cypress Reservation.

Jewell, an Obama administration Cabinet member in charge of conservation, proper land and water use promotion, fish and wildlife protection and environmental values preservation, got an earful Jan. 9 about the Florida Power & Light (FPL) plan to build a monster power plant next door to the Big Cypress Reservation.

“(FPL) is trying to railroad around us,” Big Cypress Councilman Mondo Tiger said during a meeting with Jewell at the Frank Billie Field Office.

“The corporation (FPL) will do end runs around the environmental groups. We need your help every step along the way,” Big Cypress Board Rep. Joe Frank implored Jewell.

Jewell, in Florida for the Everglades Coalition’s annual conference on restoration of the ecosystem, acknowledged the Tribe’s “deep and enduring connection with the land.”

“Our interests are aligned with Everglades restoration – the water, fauna and animals. We know that humans are taking up more land, and we know we can learn from you what is working now,” Jewell said.

But she admitted to being new to the magnitude of the FPL’s power plant issue.

Before Jewell’s arrival, the activist groups, Tribal members and others gathered “to sharpen our pencils” in preparation for Jewell’s visit, said Wovoka Tommie, of the Big Cypress Council Office. The Department of the Interior also oversees the Bureau of Indian Affairs.

The gas-fired power plant – one of the largest in the nation – could be built on the 2,300-acre FPL site a little less than 2 miles north of the reservation’s border. FPL’s property butts against the reservation boundary line, about three football fields from the proposed site of the future Ahfachkee High School.

Scientific reports are not yet available concerning chemical emissions from the plant’s 15-story towers that will impede the rural landscape and billow smoky steam into the air.

“The absence of information is the biggest problem we have, but we all know that when it comes to chemicals in the air, what goes up must come down,” said Panagioti Tsolkas, of Earth First!

But Tsolkas said the proposed plant’s twin, the West County Energy Center in Palm Beach County, leads the region for producing greenhouse gasses – the main source of global warming. According to a Department of Environmental Protection report, the Palm Beach plant in 2012 alone discharged 9.1 million metric tons of carbon dioxide, the industrial gas most responsible for climate change.

Betty Osceola, of Trail, said environmental contamination is already a problem in the Everglades. The sugar industry has been blamed for mercury in the water which, according to Sierra Club Florida, can be harmful to unborn babies and can cause brain and nervous system damage.

“We can barely hunt and fish anymore. They are killing our land,” Osceola said.

The Hendry County FPL site sits on proven habitat and mating grounds for the endangered Florida panther. It is also home to other threatened or endangered creatures, including the crested caracara bird, snail kite bird, wood stork bird and eastern indigo snakes.

Matthew Schwartz, executive director of the South Florida Wildlands Association, said the FPL plant could be stopped if the U.S. Fish & Wildlife Service and the Department of the Interior invoke the “jeopardy opinion” of the Endangered Species Act.

The provision directs federal agencies to refuse authorization and prohibit funding for projects that jeopardize the existence of any listed species.

“A project this size will lead to extinction. They can’t turn their backs on it,” Schwartz said.

The site is within a well-established migration corridor not only for species on the verge of extinction, but for deer, black bear, hogs and all animals that depend on the uplands for survival, he said. Part of the Florida Forever Project, called Panther Glades, the area is especially crucial during the wet season when water levels are too high to live or hunt.

Even a map on FPL’s own website indicates that the area, which encompasses the Hendry plant site, is within extreme panther habitat.

“The FPL property is in the heart of it all, and the plant would be like driving a knife through it. Not only will it degrade the land, it will reduce the value of the corridor that wildlife has used forever,” Schwartz said.

Meanwhile, Tribe attorneys are preparing for round three in court battles with Hendry County against the rezoning of the land that, attorneys say, goes against the county’s own land use guidelines. The next court appearance is in April.

Jewell said she wants her office updated as the court case draws near and as FPL begins to submit mandatory applications according to the Florida Electrical Power Plant Siting Act. She said a representative will be “at the table” as the issue continues.

“It is important for us to be informed so that we can know what role we can play,” Jewell said.