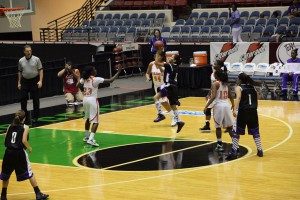 LAKELAND — The Hollywood Christian girls’ basketball team finished their 2012 season with an impressive overall record of 21-8.

The Hollywood Eagles might have lost the Class 2A state championship game on Feb. 22, but they put up quite a fight.

Just seconds away from the final buzzer, they were leading the game against Florida A&M University Developmental Research (FAMU) with a score of 53-52. One defensive stop was all they needed to take their second straight championship.

But FAMU Baby Rattlers’ LaKaris Salter dribbled her way past halfcourt and connected on a buzzer-beating 3-pointer to stun Hollywood Christian 55-53, taking the Class 2A state title.

“It was unbelievable,” said Hollywood Christian senior shooting guard Ariah Osceola, who scored 11 points in the title game. “Everything happens for a reason. God wouldn’t put us through something we couldn’t handle.”

“We definitely tried to foul,” Adamson said at a press conference. “Whether he missed it or didn’t want to call it or wanted to let the play go on, whatever the case may be, it’s no fault of anybody.”

Adamson gave credit to Salter, who scored 25 points and made 18 rebounds, for hitting the championship-winning shot at the last second.

“The kid made a tough shot,” Adamson said. “What can I say? That’s a big moment for her. They deserved it.”

Down 45-39 entering the fourth quarter, Hollywood Christian used a 15-0 second-half scoring run to take a 50-45 lead with less than 5 minutes left in the game.

In that game-changing stretch for Hollywood Christian, Ariah, who energized The Lakeland Center’s crowd with a quick steal and layup in the fourth, scored 6 of her 11 points and recorded two assists to put her team in position to potentially win the game.

“I think we settled for the outside shot,” Adamson said of his team’s struggles shooting the ball down the closing stretch. “I felt like we could get to the lane when we wanted to. Sometimes, when you’re open and you’re a shooter, your mindset is to shoot, whether it goes in or not.”

Ariah, who played with a wrist and knee injury, said she found the strength and drive she needed to pull her through the minor setbacks.

“My dad (Marl Osceola) told me to keep my head up and keep playing,” she said. “The strongest players can go through the toughest things. You just have to have your heart in it to play.”

Ariah, who recently committed to play women’s college basketball at Miami’s St. Thomas University beginning next winter, was one of four Tribal members who played for Hollywood Christian in the state final and throughout the season.

Ariah’s younger sister, seventh-grader Skyla Osceola, contributed in Hollywood Christian’s state title game, scoring 5 points and grabbing four rebounds in the final. Her coach gave her credit for defending FAMU’s Salter during much of the game.

“She made it tough for [Salter] to catch the ball and get to the basket,” Adamson said. “I think she did a great job with a tough matchup.”

The four Tribal players finished their title run with a team that has made it to the state Final Four for five seasons in a row, including a state championship win last season.

They played integral roles in Hollywood Christian’s journey to the 2012 title game, including regular-season wins over North Broward Preparatory School, the Community School of Naples,

In one of Hollywood Christian’s wins – a 65-50 win over Dwyer on Dec. 23, 2011 – Ariah scored Most Valuable Player honors. Ariah earned 24 points, four steals and four 3-pointers in the game, leading her team past the Panthers to win the South Florida Holiday Classic championship in Hollywood.

En route to the Class 2A state Final Four, the team played against Miami’s Westwood Christian School in their Class 2A Region 4 final on Feb. 18. Miccosukee Tribal citizens Haley and Saige Osceola were among the Westwood players. The game was a 73-6 home win for Hollywood Christian.

Additionally, Hollywood Christian pulled out a 49-47 win over Boca Raton’s Grandview Preparatory School in the Class 2A state semifinals, which sent them to the title game.
Ariah, who played on the Hollywood Christian varsity team since sixth grade, did her best to keep things in perspective.

“It’s been a good season,” she said. “We’ve had good seasons ever since I started playing varsity basketball. I feel that God has blessed me. Hopefully I set a good example for my younger teammates. Hopefully they’ll be up here (in Lakeland for states) next year as well.”